The Government is to spend $400,000 to get Amazon's smart speakers into the hands of blind and low vision New Zealanders as the voice-driven technology becomes a growing part of day-to-day life.

The funding, announced by social development minister Carmel Sepuloni earlier this week, will allow for 3,000 Amazon Echo smart speakers to be distributed to people around the country. The speakers, which come in a variety of formats, from the puck-shaped Echo Dot to the full-sized Echo Studio, are operated via voice commands, with digital assistant Alexa adept at understanding the Kiwi accent.

The move sees the Government opt for the most established smart speaker technology on the New Zealand market.

Amazon rival Google has only just begun just selling its own Nest Home smart speaker devices here officially, though people have been parallel-importing them for years and enjoying much of the functionality US and European users do.

But having had the smart speaker market to itself for several years, Amazon has the advantage of attracting software developers who have developed so-called "Skills" for the devices. With the Air New Zealand Skill you can ask Alexa about your upcoming flights. The Metservice Skill will tell you the weather forecast. Media Skills such as Rova from Mediaworks, 1News and RNZ will play local radio stations and news bulletins through Alexa. 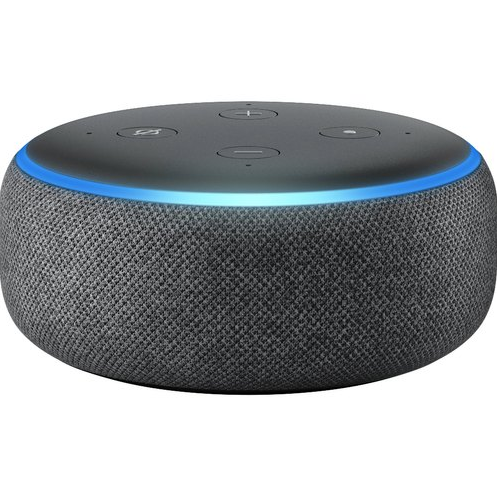 With the Echo devices increasingly employed in home automation, allowing users to control their lighting, thermostats on air conditioning units, security systems and even garden sprinkler systems, they also have the potential to help the visually impaired automate tasks at home.

It's fair to say that the Amazon Echo becomes more useful as the Skills tailored to the needs of local users expand and Amazon still has some work to do on that front. Local developer interest in creating Skills has been limited, given the low penetration of smart speakers in New Zealand homes to date.

One local developer which is focused on voice application development is Auckland-based Sonnar, which developed the Skill for Vision rehabilitation service provider Blind Low Vision NZ

That Skill available via the Amazon Echo allows registered users to access a collection of audiobooks and magazines with voice commands.

Geraldine Lewis, the organisation's Library and Studios manager, told 1News that 1,500 people are currently using the library. With 168,000 New Zealanders who are blind, low vision or deafblind, technology still has a long way to go to make life easier for the visually impaired.

One area of technology development that holds promise for the blind is spatial audio. Apple last week announced it will bring the functionality to its AirPods Pro wireless earbuds and other earbud makers are doing likewise.

That is primarily designed to bring surround sound formats like Dolby Atmos to the earbuds, which will assist making movies more immersive and augmented reality games more realistic. But they also hold huge promise for the blind.

"Imagine for a moment you rely solely on your hearing to navigate through a crowded mall.  If you can't see your surroundings, how do you know where you are?" explains Forbes writer Charlie Fink.

"Using spatial AirPods, the computer in your pocket finally knows where you are looking, so apps will be able to guide us by sound direction and proximity," He adds.

You could have a voice assistant in your ear telling you what shops are around you in the mall, based on where you are looking and identifying hazards based on the sounds pitched up via the microphones on your earbuds.

Microsoft, in 2018, released Soundscape, a free iOS app for the iPhone that allows a user to get audio cues about what is around them. It is based on mapping data from Openstreetmap. Audio beacons can be created flagging points of interest or commonly visited locations, which are identified in 3D - as you approach from different angles, stereo headphones will point you in the right direction. The visually impaired won a major victory in January when the Marrakesh Treaty was signed. It means that New Zealand can exchange accessible versions of information with other countries who have also joined the Treaty without us having to clear copyright in its origin country.

"Not many publishers are producing books in this way. It would not only open up access for print disabled New Zealanders, but it would also open up publishers to a new market," says Geraldine Lewis.

"Blind Low Vision NZ for one would be a customer - it costs less for us to buy an accessible version of a book than produce an accessible copy in our studios."