Griffin on Tech: Auckland could become a mecca for innovation - here's how

We love seeing our cities make lists of the world's most liveable cities or the best cities to visit on holiday.

They range from whether it has a "safely walkable CBD" to the number of multinational corporations headquartered there and the use of smart devices by citizens.

In the 2021 Innovative Cities Index, Wellington is the only New Zealand city to scrape into the top 100 list in 98th place, between Budapest and Tallahassee.

Tokyo claims the top spot, followed by Boston, New York, Sydney and Singapore. Auckland is our biggest city and the country's economic centre. It has a thriving innovation scene with a large number of tech start-ups and research institutions. But a number of barriers stand in the way of it becoming a city known on the world stage as an innovative place to live and work. In a new report from Koi Tū, the Centre for Informed Futures, Sir Peter Gluckman and colleagues outline a number of potential scenarios for the future of Tāmaki Makaurau.

One of them, Scenario 4, involves Auckland becoming a widely recognised innovation region, one that would focus on the weightless economy and leverage "knowledge and creativity as an asset for economic prosperity and societal wellbeing".

As a lapsed Aucklander, now priced out of the city I grew up in, it sounds like the sort of city I'd like to return to. But what are the barriers standing between Auckland and innovation greatness?

According to Koi Tū they range from a lack of investment in R&D to the relatively low productivity of the city's businesses, inefficient transport networks, an inability for our companies to sufficiently scale-up and lacklustre collaboration between the private sector and the city's research institutions.

A place desired by many?

While Auckland businesses have made their mark in fields ranging from agritech and manufacturing to information technology and healthcare, writes Sir Peter, "for the most part these companies have failed to scale up to a point where they can successfully compete in and continue to grow within the global economy."

Overcoming these barriers, he argues, involves Auckland taking a "more strategically aligned view of the future". Does it want to become an innovation hub mentioned in the same breath as Tel Aviv, Austin or Chattanooga (yes the small city in Tennessee has developed a thriving tech start-up scene, partly due to its incredible broadband infrastructure)?

Auckland really needs to want to become an innovation centre, one where technology increasingly drives how the city is designed and managed, as well as the products and services that are turned into weightless exports that will increase salaries while cutting our carbon footprint.

Singapore stands out for its determination to become a "smart city", embracing technology to make the city more liveable, sustainable and productive. It has been a very successful journey for Singaporeans.

But what is Auckland's thing? After all, Koi Tū outlines nine possible scenarios. It could decide to be a sustainable city, an indigenous city or focus on social cohesion. None of these things is mutually exclusive, but knowing what you are setting out to achieve certainly helps. That's why Auckland Council commissioned Koi Tū to canvas the potential options to pursue to set up Auckland for success in 2070.

It all comes down to what Aucklanders want for their future, a question that will be in the spotlight as the city looks towards its local body elections in October.

But Koi Tū's vision for Auckland in 2070 in the innovation region scenario is the one that I would vote for if I could. In that scenario, Auckland has grown its medical technology, space, gaming and digital service industries into major exporters. 3D printing means that "templates rather than products are exported", achieving the weightless economy that has reduced our reliance on cows and crops. 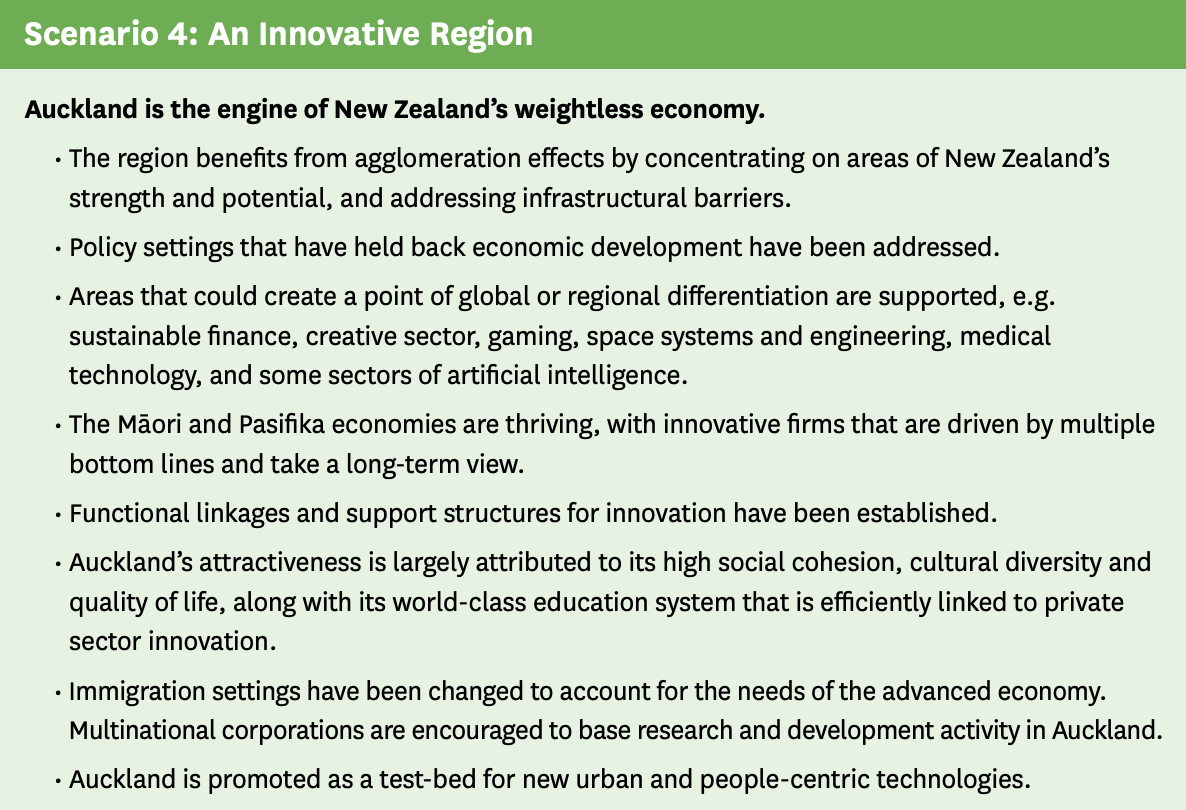 As the sprawling city's population approaches two million, Auckland has some thinking to do and some strategic decisions to make. In the city's broken transport system, we've seen the impact of decades of poor planning decisions. Aucklanders can't afford to take such a haphazard approach to charting their future.

As Sir Peter argues: "We must find the path to live up to the implied meaning of the name Tāmaki Makaurau, 'the place desired by many'."