Brislen on Tech: The future of work is now

The future of work

It's just over 100 days since the first COVID-19 case hit New Zealand shores and in that time we've been through quite the rollercoaster.

We've all learned a new vocabulary. The average layperson's understanding of some key scientific principles has increased dramatically, whether we wanted to or not, and for most of us the end result has been a lot of sitting around at home wishing we were elsewhere. 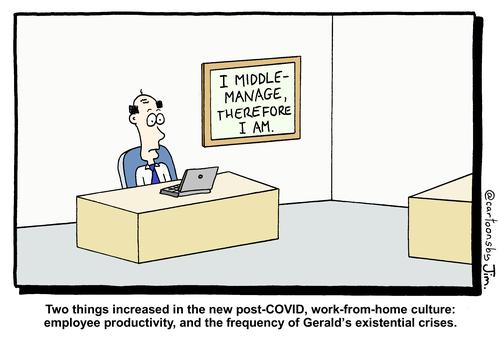 No other part of life has been quite as affected as our work lives, and for some of us we've done the impossible and introduced cultural change to our businesses at a run.

Take 2Degrees for instance. After years of thinking about bringing in a policy of allowing its contact centre staff to work from home if they want, and deferring it year after year as being too disruptive and too costly, the telco had all its contact centre staff working from home successfully in a matter of a couple of weeks and it's entirely possible they won't come back.

I've been working from home for most of the past two decades. I started when I was made the online reporter at Computerworld and discovered that a daily deadline was incredibly hard to manage in an office where everyone else was on a weekly cycle.

I loved the weekly cycle. It went like this:

Mondays - ease into the week. Make a few calls, plan out the week.

Tuesdays - do some interviews, write some bits, no pressure.

Thursdays - relax, have lunch with the team, my god what a week that's been.

Fridays - go out for lunch, visit vendors, go for drinks, think about leaving early to beat the rush.

It was fabulous, but when you're on a daily deadline that environment is only conducive to work one day a week and with my editor working from Dunedin it really didn't matter where I was, so home I went.

Since then I've discovered three things about working outside the ordinary office: firstly, it's much cheaper than working in the city because there's less commuting, less eating expensive lunches and fewer coffees.

It's also less stressful because there's no commuter chaos to think about. I can, and often did, work in my pyjamas when the kids were babies and keeping me up all night. It was great - I was involved in their lives right from day one although they didn't take kindly to early morning conference calls that meant shutting the office door.

And thirdly, I was vastly more productive working from home. Most home workers are - they're desperate to make sure they're not dragged back into the office so they go all out to make sure the boss never has any reason to say "this isn't working".

Of course, I chose to do that and was lucky enough to be supported by an employer who was relaxed about it, easily identifiable outputs (either there were stories in print or there weren't) and a job that could be done predominantly using a phone and a computer.

But now most of us have had a taste of it and there are plenty out there who like what they see. A pre-COVID survey in Australia found that 99% of those polled would work from home at least some of the time if they could.

The problem has always been a cultural one. Too many middle managers who are scared of being taken for a ride, who think that unless they can see you at your desk you're not working. They bring a Victorian-era ethos to management and they manage you by inputs (time at desk, number of phone calls, meetings attended) rather than by outputs, and that's always held us back from working remotely.

Now of course all bets are off. Most companies have had to embrace the new way of working and for many it's lead to a revelation. You don't need to have staff sitting in glass-walled central city offices that cost a fortune to operate. You don't need to provide car parking and coffee, electricity and internet access and all the rest. It's a bit like BYOD but for the whole employee - there's savings to be had here for the employer as well as the employee.

Prior to COVID I was working in central Auckland. If I took the train it was an hour door to door, which was too long for my liking (although I did catch up on my podcasts and people watching). When I drove in and out it was more like 25 minutes each way but the cost was $100 a week in parking, plus fuel, plus the $5 coffees, plus the $20 lunches. I've spent 100 days not spending that much and it's been great. The only problem there is my waistline and that's more about my wife's response to COVID (bake all the things) than anything else. Overall my costs have gone down hugely and my productivity has gone up.

The next phase of the outbreak will be far more difficult for many companies. Already we're seeing mass layoffs and restructuring as the tourism and retail sectors take a hit, but that wave will also come to the rest of the business world as well. The OECD is predicting the worst peace-time economic outlook for more than 100 years and it's only just beginning.

Companies will have to find cost savings and while they're starting with employees and contractors, the next step will have to be bigger fish. If 2Degrees can send an entire contact centre home, do they need to come back? Can they get rid of the office entirely, the way AMP is doing, and save a bundle?

Internationally, major companies that can are looking closely at remote working as a solution for spiralling costs. Facebook expects half its workforce to be working remotely in the next few years, but of course being Facebook if you take that option and move somewhere cheaper, the company will adjust your salary accordingly. Of course it will.

But there are other benefits from a remote workforce. Not only do costs go down but company resilience goes up. We are now fully prepared to pick up our collaboration tools, our Planners and Slacks and Mondays and head for the hills at a moment's notice. Companies that have never had a real business continuity plan now have field tested one that works brilliantly well. Why wouldn't you carry on with it? And what about the impact on the environment of not having hundreds of thousands of us traipsing in and out of the CBD every day?

And of course there's the old work-life balance to consider. Cutting a two-hour round trip out of my day means I can work off some of my wife's excesses at the gym or on the bike and not feel guilty about not being at work.

We've already made the leap - I trust for a large number of us it's a leap that will see us land safely on the other side, and not be hauled back into the office unless we chose to.

The next few months will show us which employers decide they have to have us sitting in rows and which say "just make sure you hand in the work we discussed" and then maybe the next wave of redundancies will be in the soggy middle management strata and not front-line staff.