It would appear that despite 6.29 million confirmed cases and 380,000 deaths worldwide, New Zealand has escaped the worst of COVID-19 relatively unscathed.

We locked the country down, we did what was asked of us, and while countries like the US, Sweden and UK report record numbers of deaths, untold damage to the health system and to public trust in their political overlords, countries like New Zealand and Australia emerge ready to reopen our economy and to drive growth.

The question is of course, how do we do that and how quickly can we get these programmes of expansion and growth up and running? 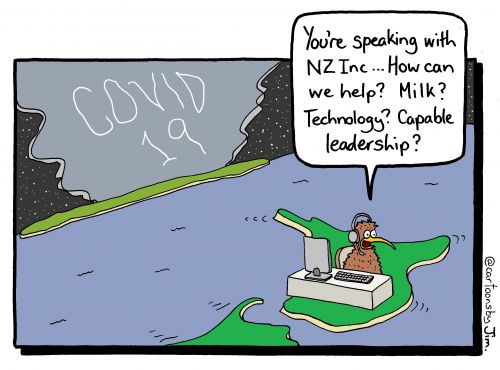 Treasury is releasing a weekly update of our economic situation with a look at how we compare with competitors and neighbours, job figures and other indicators used to tell us how we're doing. Retail spending is all but back to pre-lockdown levels which would have been astonishing only a few weeks ago and unemployment figures continue to rise but at a slower rate than we've seen in months. Perhaps the slowdown won't be as bad as we first thought.

But these are indicators of the recent past and no doubt the rest of this year will be focused on figuring out what to do after the wage and salary support comes off, how to retrain a large part of the workforce for new roles and what to do about long term economic outputs for a country that is so reliant on exports.

We have already committed more than $60 billion in economic stimulus and largely it has gone to the sectors that need it the most. That has helped get us over the hump of short term pain - now to look to the longer term.

While I'm guessing doubling the population in short order to support the tax base and deliver a massive jolt to the economy is out of the question we can and should try to pick some winners and push hard to jumpstart those parts of the economy that can flourish in the coming months and years.

First we have to face facts about our tourism sector.

BC (Before COVID), tourism employed more than 230,000 people around New Zealand and was responsible for an annual expenditure of $40.9 billion in the last full year. According to MBIE, International tourism expenditure brought in $17.2 billion, and contributed 20.4 percent to New Zealand's total exports of goods and services. In total (including domestic activity), tourism generated a direct contribution to GDP of $16.2 billion, or 5.8 percent of GDP.

That has vanished almost entirely, and frankly I don't see many signs we can rebuild that level of activity from international visitors any time soon. It will be months before we start to see business travel kick off again, and then we're likely to see tourism slowly trickle back from those areas we're able to prove are least likely to infect us.

That's assuming of course that these countries of origin are able to start their economic engines to the extent that individuals feel confident enough to take an overseas' trip to a country that is a long way from home.

We are unlikely to see international tourism at these levels for quite some time - I'd say four or five years at the earliest and possibly longer than that.

Domestic tourism is another matter. Last year expenditure from Kiwis travelling around the country reached $23.7 billion and if our economy does rebound well enough to keep a larger number of us employed then we might be able to rescue some of this spend.

But either way, tourism isn't going to be the number two or three economic agent for some time to come.

So what is going to keep the coffers full?

Primary sector production remains high and Fonterra and other milk producers will be happy to see demand for milk powder in particular hasn't reduced during these difficult times. People need to eat and we will continue to provide food for the world's stomachs.

In many respects it's quite good to see China remain such a large part of our export market because China is returning to some semblance of normality far more quickly than many of our other export partners.

But outside the primary sector most of the indicators look grim. StatsNZ has a dashboard of metrics that makes for alarming reading. While business and consumer confidence have both ticked upwards in the last couple of weeks, manufacturing's outlook is bleak and almost every sector is reporting fewer job advertisements right across the board.

The only sectors not seeing a downturn in job advertisements are health (not surprisingly) and the ICT sector.

This isn't surprising really. If anything, the tech sector has been in high demand during the lockdown with staff asked to work remotely where they can and companies that rely on office staff suddenly bringing forward spending on cloud migration to enable remote access to essential data and applications.

This is likely to continue as other industries realise they too can and should operate remotely and offer services via online channels. Retail is an obvious target for such activity but so too is education something which has been hard hit by migration restrictions. Why not teach those valuable offshore students remotely for the time being?

The broader tech sector will continue to march on and all those promises we've made over the years about the knowledge economy can and should come true, but they'll need a few things to kickstart activity.

Firstly, the New Zealand government needs to pay attention to NZ Rise's "New Zealand made" campaign. Local product is as good as international but the way government procurement works only those companies large enough to have a team writing tenders can really break into that most lucrative of markets - the government.

Government needs to get smarter about its purchasing power too. I suspect we'll see massive consolidation of IT spending across similarly placed government agencies in the next 12-18 months. There's no reason for local government or district health boards to all have bespoke IT systems when their neighbours have the same needs. Pooling of resources will be essential in both those markets.

Secondly, we have to start picking winners. The R&D tax break regime is fine but we're competing for knowledge workers with Singapore, with Estonia, with countries that are desperate to get ahead in the digital space while we bimble along hoping to magically produce another Xero or PowerbyProxi. We need to empower investors, encourage developers, support students to retrain in our sector and we need to start right now. Those tourism sector workers were paid a pittance - how about we offer retraining in the broader ICT field and upskill them and ourselves along the way.

We need to increase spending outside the main centres and push for more investment in the regions. Nelson, Hawkes Bay, Northland, the Bay of Plenty - there are people there crying out for jobs and opportunities and if we don't provide them we'll end up with a hollowing out of New Zealand as people follow the jobs and move to the big cities.

Lastly, we need to embrace Professor Paul Callaghan's mantra of making New Zealand the place where talent wants to live. Now, more than ever, New Zealand is one of the most attractive destinations in the world. We have smart leadership who have steered the ship of state through the outbreak and positioned us for success. Who wouldn't want to be part of that? Let's lure the big IT companies to set up shop here. Let's fast track visa applications for highly skilled workers. Let's provide tax breaks for companies to set up shop in the South Island or the Far North. Let's encourage investment on a scale not seen before and let's absolutely pick winners.

We can and should become a digital champion nation. That we haven't so far is a mystery to me but it's an obvious thing for New Zealand to do given the state of the world around us. Outsource your brains to New Zealand and let us keep the lights on for you.

We've been talking about this for long enough. Right now the door to opportunity is open: it's high time we stepped through into the light.