Level 3 is upon us and we have to prepare for the worst.

You know the worst - the people in bars and cafes, in offices and on buses and trains, all failing to socially isolate (either because they can't or because they get a bad case of the "yeah nahs") and we get a resurgence of COVID-19 and we get pushed back to Level 4.

Of course there is one way to open the doors and let us all out but have us ready to retreat into our bubbles like one of those crabs you watch on the wildlife shows that duck out of cover, grab some food, and duck back in to safety.

I'm talking about contact tracing - the mechanism whereby we don't rely on frail human memory ("Uh, yeah I went to the shops and then to the office and then home. Oh wait, I went to the gym too. Oh and I got a plane for a bit.") but instead have our phones do what they do best - remember things for us.

Typically there are a couple of ways to do this - the quick cheap way and the expensive slow way.

The expensive way is to get Google and Apple (sorry, Microsoft) to work together on a new standard for contact tracing that makes use of Bluetooth to track the user's movements. Surprisingly, this is actually being developed as we speak and will involve the use of software keys being handed out by devices to all within range.

If I get on the train to work, wander around the office all day and go home on the train with my phone is in my pocket (a not unreasonable expectation) then the phone will check in periodically with all the other phones it meets to say "here's Paul's key". Likewise I'll get everyone else's key as well.

Should I or one of my contacts get sick the health officials will let Google and Apple know, my key will be tagged as active and everyone who picked up my key during the window will be notified of the potential outbreak. They can self-isolate and hopefully we can avoid a major outbreak of the disease.

This is great because it solves the problem of privacy - nobody knows who I've been in contact with at all - and the data is stored locally on my phone so there's no worry about the need for massive amounts of storage for the entire country. Best of all, I don't have to remember to do anything except carry my phone around. I can do that.

That's going to take a while to deploy, however, and the devil will be in the detail. And so it is the New Zealand government is looking to the quick and dirty version which involves QR codes.

I jokingly told a reporter this week that QR codes were widely used one afternoon in June of 1856 after which they quickly fell out of favour, but that's something of an exaggeration. QR codes never lived up to their billing but do have a function and this could be their moment to shine.

So imagine our commuter scenario but with a manual process. I scan the QR code on the train and again at the office, and when I go for my coffee I scan in there as well. A picture of my movement is built up and sits alongside everyone else's and if one of us gets sick the Ministry can… well, they can phone everyone on the suspect list.

It's manual, doesn't quite have the same level of sophistication but can be deployed rather quickly.

Either way it relies on having a few components. A phone, a network that allows users to connect their phones to other phones and of course a government agency that will look after the data and not leave it lying around for anyone to stumble across. Isn't that right, Sheffield City Council (see story below). 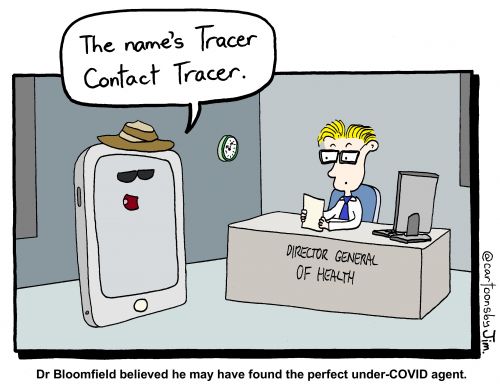 I saw a tweet this week about how lovely it is that the phone companies are giving out free mobile data when we're all trapped at home.

It's true - there's a lot eagerness among the cellphone companies to keep us all connected and why not? Spark's data suggests broadband traffic is up around 40% on pre COVID-19 levels and given we're all going to carry on working remotely for ever more (who's with me?) that number is going to remain high.

We've lost the tourism sector for at least the rest of this year and possibly a lot longer - access to technology and solid networking is essential if we're to have any hope of backfilling that $12 billion hole.

Which is why when we are still hearing stories about idiots deciding to burn down yet more cellphone towers and when there are still muppets out there protesting about radiation when they clearly haven't bothered opening their eyes (look around you - if it wasn't for the non-ionising radiation you wouldn't be able to see) it all becomes a bit dispiriting.

So let's have a look at the alternatives. Let's see where the gaps are in our network build and sort those out.

The government plan for broadband includes reaching more than 98% of the population - only a few thousand households won't be able to get access and those are in the really remote parts of the country.

This is tremendous news because it is precisely those remote and regional users who need better broadband and if the cost of deployment is too high for the market then the government needs to get involved.

Which is why Rod Drury's comments about government intervention in 5G were a bit odd.

Sure, we could do with intervention. We need the network deployments to go ahead now, not when the spectrum auction is finally approved. We could do away with the auction altogether and use the opportunity to even out the network operators' spectrum holdings to level the playing field a bit. It would also accelerate deployment if the government didn't take a big fat cheque but instead ploughed the money back into deployment.

But what Rod was suggesting is that the government take over building the network and then lease space on it back to the telcos and I can't see the justification for going that far.

Sure, it worked with the UFB but there was clear evidence of market failure there. Telecom had said loudly it would not build a fibre to the home network, and its argument was holding back the New Zealand economic opportunity. So government intervened and here we are today with gigabit speeds on offer to the vast majority of New Zealanders.

And sure, having three competing networks might seem a bit silly for a nation of five million people - but that's the opposite problem. There's not too little competition holding back deployment, there's vigorous competition that is changing the prices we pay and the services we can use.

I can see why you might rationalise the build in non-commercial areas - much as we've done with the RBI project for rural users - but for the rest of us? No, thanks. We would lose too much to solve a problem that doesn't really exist.

But whatever the solution is we have to act quickly and we have to act decisively. We have an opportunity to jump start the tech sector and as a result the New Zealand economy in a way that we haven't had before.

It's time to get stuck in and all eyes will be on the government's budget to show the way.

NZ Herald - Rod Drury welcome to the Covid 19 party, but wrong on 5G

From what I hear, the Apple & Google approach to contact tracing is built in to the mobile OS, avoiding the issue of having to have a foreground app running.

There is the slight problem in the Android world that many handset makers rarely if ever update their deployed phones' OS.

Say you could convince every Xiaomi (even Samsung with lower end phones) to push an update, it would be updating more or less every handset they ever shipped. That means handsets with very old OS' suddenly get a very new OS. So lots of apps, probably even lots of handsets, break.