Small business over the worst impacts of the pandemic, increasing IT spend

Most Kiwi small and medium-sized businesses are out of the "survival mode" that got them through the lockdowns and disruption of the pandemic and are now dialling up spending on cloud, cybersecurity, and laptops/PCs, according to analyst group IDC.

A survey of over 1,000 SMBs across New Zealand and Australia found that 57% were either growing again or operating successfully in new modes of operation and 62% of local SMBs planned to increase IT spending this year.

That's a big jump on the 43% who last year signalled they were looking to increase IT spending. IDC puts that down to "increasing confidence" as small and medium-sized businesses, classes by IDC as having up to 500 employees, recover from the impacts of the pandemic and realise the importance of digital transformation.

"The majority of SMBs in A/NZ are now optimistic about the future," says Emily Lynch, Senior Market Analyst, Research & IT Services at IDC Australia and New Zealand. 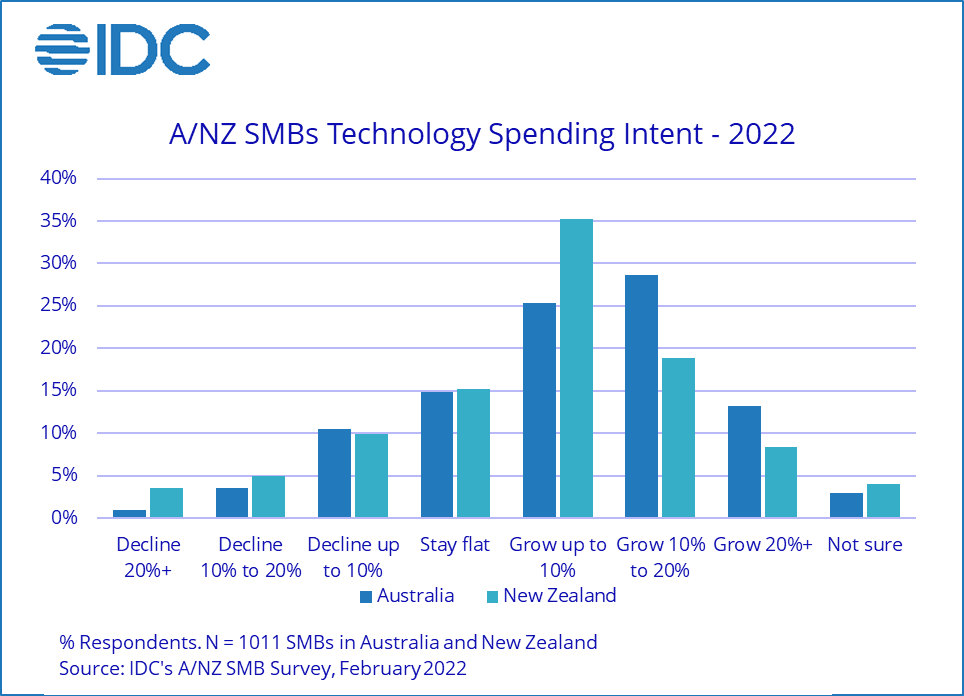 "Cloud, collaboration, and cybersecurity are key pillars of investment for A/NZ SMBs. These organisations are seeing the gains of these investments in improving productivity, time to market, and leveraging new digital technologies. Notably, we see that SMBs are deriving increasing percentages of revenue via digital channels," she adds.

The Government established the Digital Boost scheme during the pandemic to help SMB owners and staff upskill to embrace digital platforms, develop websites and embrace digital commerce. The scheme was funded to the tune of $64 million, with $20 million coming from the Covid-19 response and recovery fund.

Last week's budget saw the Government commit $100 million towards a Business Growth Fund for SMBs, which Stuart Nash, the minister for small business, says will improve access to loans so SMBs can grow, "drive economic security, innovation, and low-emissions growth".

The Business Growth Fund would see the Government become a minority shareholder in a scheme alongside existing financial institutions, mirroring schemes run in Australia and the UK.

"These funds are generally collectively owned by private banks, while the Australian version also has the Commonwealth Government as a shareholder. Since 2011, the UK Business Growth Fund has invested around £2.5 billion ($4.9 billion NZD) in a range of sectors and in 399 companies," says Nash.

Small businesses may also be able to dip into funding as part of the Regional Strategic Partnership Fund (RSFP) which the Government will add $110 million in new investment over the next year.

While Kiwi SMBs have generally been considered to lag those in other countries when it comes to digital skills and preparedness, the IDC research suggests they are moving up a gear in their digital investment as a result of the pandemic.

The analyst group anticipates the key areas of investment to be in the cloud, cybersecurity, and laptops/PCs, with productivity and collaboration solutions not far behind.

Expanding their portfolio of applications and IT systems spread across on-premises and cloud environments is creating integration challenges for SMBs. That represents an opportunity for IT integrators, IDC points out, particularly those geared up to serve the needs of SMBs, which don't have the necessary in-house digital skills required to maintain their own IT infrastructure.