It's ten years since Apple released the iPhone and changed the mobile world forever.

It's no exaggeration to say the iPhone was revolutionary but it's easy to forget just how far the mobile world has come since its introduction on June 29, 2007. Prior to the iPhone, the biggest selling smartphone in New Zealand was a Nokia (oh, there was a company called Nokia that made phones back then - they ruled the world). It retailed for $1499 and one wag said that was a dollar per button. The thing had a full keyboard, buttons on the side, arrows, a big red one marked "depress" and goodness only knows how many others.

Of course, the smart corporate users (those who got the boss to pay for the service) were all on Blackberrys (oh, there was a company called RIM that made phones that got email - they ruled the email world). The early Blackberrys looked like label printers and had about as much capability. But you could get your email on them and weigh down quite a large stack of papers should the need arise.

For some reason the kids in the US were all using Blackberrys and other, similar devices to TXT each other and by golly they thought they were the cat's pajamas. The reason was simple - the US didn't really get GSM and only had CDMA networks so TXTing was impossible (or at least very impractical). So this plethora of alternative devices had sprung up offering similar but alternative capabilities (remember Push2Talk?) and so the market had grown huge and bloated.

And then this slab of plastic and glass with only one button arrived and that was that.

By the time it arrived in New Zealand it had moved to 3G for network capability and users discovered that not only could they send TXTs and get email on them, they could also take pictures, and share them on this fancy new emerging social media scene. There was even rudimentary video capability if you were feeling particularly flush.

And then the apps started appearing. Downtime became playtime. Media houses discovered push notifications. Games, musical instruments, note taking apps, you name it. One bajillion apps later we have whole new industries emerging based solely on the mobile device market and all thanks to that original iPhone.

In the process Apple destroyed the market for its biggest selling product - the iPod - and didn't even blink. That takes some guts and sadly I doubt we'd see the same heroism today but that's a problem that Apple will have to learn to deal with. Apple no longer sets the market alight. Its later iterations and upgrades have consisted of slightly larger models with slightly more processor capability and while they sell by the millions (over a billion iPhones have been sold since June 2007) they're no longer leading the pack in terms of cool new features.

Apple also, along the way, destroyed Nokia's dominance in the cellphone market, destroyed RIM's hold on the youth market (and ultimately on the corporate market as well) and upset the apple cart (pun intended) completely for the telcos by making it easier for customers to keep the device and switch providers than to switch devices and keep to the same provider. Suddenly you weren't a Vodafone customer with a phone any longer, you were an Apple customer who happened to use Vodafone's network.

And that genie isn't going back in the bottle any time soon.

Recode - How Apple's iPhone changed the world: 10 years in 10 charts

Apple Insider - Apple's iPhone is 10 years old, but its creation was decades in the making

It's true, I'm no fan of the Internet of Things.

Actually, that's a lie - I really do think the IoT is a great idea and the sooner I can get all my junk online the better. I have a car that tells me I have to update its satnav maps on a regular basis, and I tell the car to go right ahead and do what all other expensive devices do in my life - download the maps you need. Go ahead, I tell it. Sometimes I even shout it, but the car refuses to do anything because apparently I have to download the maps and burn them to a disk like some kind of animal.

No, I fully embrace the idea of my garage door being connected to the home security, lights and heating, that my fridge should know when I'm out of milk and that my car can call up my calendar when it wants to book itself in for a vehicular pedicure. I'm all for it.

But what I'm not in favour of is the constant hype about the IoT, the "50 billion devices by Friday" machine that seems hell bent on connecting everything and anything without reason or thought and which doesn't actually seem to be delivering even the most basic stepping stones we'd need to make an IoT future a bright one.

But in the meantime the marketing machine rolls ever onward and this week saw Vodafone and Spark issue dueling releases (always fun) and a new report was released claiming we could see over $2 billion in benefits to New Zealand over the next ten years.

The report, Accelerating a Connected New Zealand: An Analysis of the Impact of the Internet of Things on the New Zealand Economy, is from the IoT Alliance which is chaired by NZTech's Graeme Muller and so should be a good read. It says New Zealand is well placed to take advantage of the Internet of Things but that only 14% of companies have actually made the leap. This doesn't surprise me because clearly there are still issues to be sorted out, but hopefully that sorting will take place prior to mass adoption and not after it, otherwise we'll see the sorts of shenanigans that see cyber teddy bears taking over the world.

CIO - How the Internet of Things can bring over $2.2 billion to NZ over 10 years

The Guardian - Boy, 11, hacks cyber-security audience to give lesson on 'weaponisation' of toys 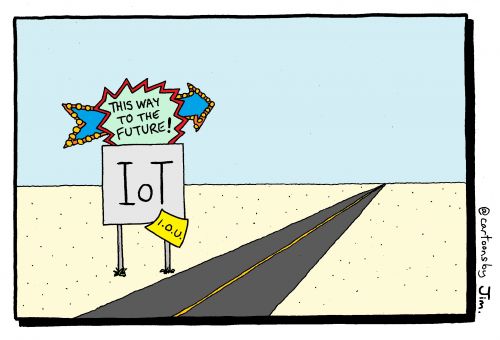 And despite the rain, the thunder and the lack of decent public transport, the people of Auckland braved the weather and transport chaos to welcome the America's Cup (oh and the sailors who won it) home after their victorious series.

The boats are a marvel of technology. Basically flying wings, with bicycles strapped to them, they're capable of ridiculous speeds and if you've never seen a foil-yacht accelerate then I highly recommend watching one from a safe distance. TV coverage just doesn't capture that sudden incredible burst of activity. It's like watching the Starship Enterprise jump to warp speed but with cooler special effects.

The Team New Zealand lack of money seemed to work well for the crew this time round. Thinking smarter and constantly upgrading the boat and the design even as they won race after race seems to be key to their success and some of the stories are starting to emerge about how those wins were secured. None more so than the secret drone technology that was put to great use filming these tremendous boats in action. There's nothing quite like seeing your product in action in high definition to really understand what needs to be changed.

Now if only we can use the Cup as an excuse to deploy some much needed non-roading infrastructure, the circle will be complete.

Sailing World - The Tech Behind the America's Cup

One reason that I share your dislike of IoT hype Paul, is that there is no such entity.

Rather, endowing 'things' with computing machinery to exchange data with them, is part of a naturally evolving realisation of a 'global nervous system' that has been happening for many years.