Stephen Town has been named as the inaugural Chief Executive of the New Zealand Institute of Skills and Technology (the working name for the new one-polytech model the government has introduced). Currently in his final year leading the Auckland Council, Stephen will formally take up his new role on July 6, 2020. 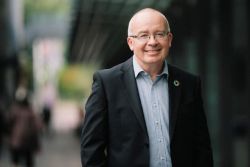 IST Establishment Board Chair, Barry Jordan, said the Board were delighted to have attracted a candidate of Stephen's high calibre after an extensive search for the right person to lead the creation of the new national Institute, which is due to come into effect on 1 April 2020.

"With more than 25 years as a Chief Executive, including a distinguished career in the local government sector, Stephen has a proven track record of bringing people together through periods of complex change. He has led initiatives to create jobs for long-term unemployed in South Auckland and built enduring relationships with iwi and hapū," he said.

"We were looking for someone who is a strong relationship builder with deep strategic experience successfully leading large and complex organisations to achieve significant improvement. The interview panel, which included a number of experienced leaders from across the sector, were unanimous in their decision to offer the role to Stephen."

Jordan said the panel was impressed with Stephen's composed and strategic focus, his ability to form enduring and productive relationships with stakeholders, and his long-term connection to the tertiary sector where his leadership journey began.

A graduate of Wanganui Regional Community Polytechnic, Stephen has maintained a deep interest in vocational education. He has two sons in the BCITO system who will both qualify as carpenters this year.

"I'm honoured to take up this role and excited at the challenges ahead. Change leadership is our greatest opportunity and New Zealand's needs will require much greater agility from the vocational education and training sector in the next two decades," said Stephen.

"Before us is a once-in-a-lifetime opportunity to build a sustainable and world-class vocational education system that strengthens communities and ultimately New Zealand. I am looking forward to working collaboratively with everyone in the sector to effect meaningful and lasting change."