Over 100 students and teachers from around New Zealand hit Wellington for an exciting day of judging, tech, tours, and culminating in an awesome finals event, joined by hundreds of others and MC'd by Nanogirl Michelle Dickinson.

The national finals of Tahi Rua Toru Tech, NZ's Digital Challenge, showed that when you ask school students to come up with new ideas to solve community problems using digital tech, they will amaze you. Yesterday in Wellington school teams from Invercargill through to Bream Bay gathered at Te Papa to compete for the title of National Champions.

Tahi Rua Toru Tech (123Tech) is a partnership between the IT industry, led by IT Professionals NZ, and the Ministry of Education to help teachers and students engage with the new Digital Technologies & Hangarau Matihiko curriculum content in a fun and safe way. Other partners include the Royal Society, Digital Technologies Teachers Aotearoa, CodeClub Aotearoa and CITRENZ as well as a host of commercial partners including Datacom and NZSE.

Check out the video from the finals:

Having won their category in the regional finals in October and November, the project-based teams competing in the first, bronze and silver challenges presented to a panel of three judges in a "friendly dragon's den" process, while the primary challenge students underwent a series of time-based activities.

In between judging, the teams went on specially arranged tours at Te Papa and across the road at Trade Me (thanks to both organisations for being such great hosts!), until it was time for the mini-expo. This was 45 minutes of tech fun that included robots, drones, VR, and even an electric garden display. The day culminated in the Awards ceremony hosted by Michelle Dickinson (aka Nanogirl) with special guests Ian Taylor from Animation Research, University of Canterbury Professor Tim Bell and the Ministry of Education Deputy Secretary Ellen MacGregor-Reid, while Associate Education Minister Tracey Martin made a video appearance.

Yesterday's winners hailed from Christchurch, Rotorua and Auckland (x2), taking home over $15,000 in cash prizes for the students and their schools. First Challenge winners, The Mish from Hillview Christian School, Christchurch: The team created a digital solution to help an existing volunteer group called the MISH streamline their process by making it easier for them to pick food up from local restaurants and deliver it to the City Mission. 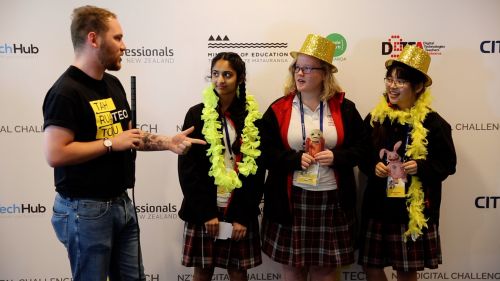 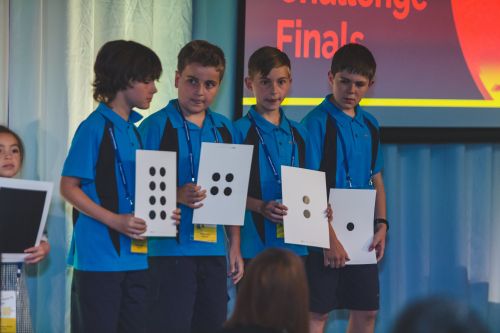 Primary Challenge winners, Arahoe Coders from Arahoe School, Auckland: The team competed against one other team in an interactive challenge on stage during yesterday's event, completing five mini challenges in the fastest time.

There was also a special award, the inaugural Ali Chivers Award which was named in honour of an outstanding digital technologies teacher, given to another fantastic educator in this space: Gerard MacManus from Hobsonville Point School. 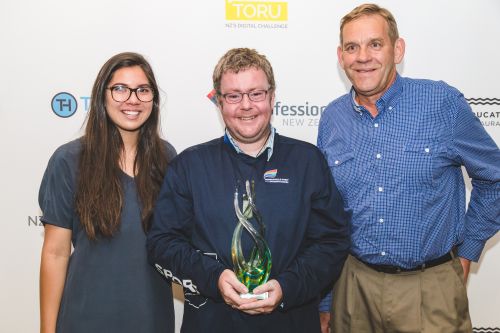 Gerard has been a massive contributor in this space, mostly in his own time. He's been a big influence on the new Digital Technologies curriculum content in schools, is contributing to a huge range of initiatives in the space, has worked hard over the last few years as Chair of Digital Technologies Teachers Aotearoa, and has helped hundreds of other teachers come to grips with the new content.

The birth of Digital Dan

As part of the 123Tech Finals we introduced Digital Dan, the roving 123Tech reporter who interviewed all of the finalists from across New Zealand: Check out the 123Tech Facebook page for all of the Digital Dan videos! Dan will also be a big part of 123Tech in 2019, with weekly update videos for students of all ages.