Back before the turn of the century I spoke to a cyber-security guy about something (probably viruses or Y2K or some such - it was a simpler time) and he told me about a regular meeting of law enforcement people who were looking into cyber security as a growing area of concern.

Not that they were worried about increasing hacking attempts or data loss but rather that the growing move to secure communications meant the police wouldn't be able to listen in on criminals planning their nefarious deeds, even with a warrant or similar.

He said they would be on the look-out for an opportunity to really push the line that we need to be protected from such folk and that any big attack would do to trigger the push for action on the legislative front.

Some months later the September 11th attacks provided just such an opportunity and duly several laws were passed giving police more access to computer systems, more rights to demand passwords and so on.

Since then we've seen a steady whittling away of our rights to privacy in an online world and that move continues apace today.

All this despite tech companies and cyber-security experts saying we want stronger locks on our doors, not weaker ones, and that the real risk in making things hackable is that they will be hacked.

The real question in all of this is how far are we willing to go in the pursuit of potential terrorists and would-be cyber-criminals? Is it worth giving away our freedoms in an online sense? Which has greater value - being able to conduct online banking, shopping, encrypted messaging and email, even web surfing without having to worry about hijacking, spoofing, phishing and outright theft of information, or being able to potentially catch terrorists who might be planning something really awful?

The US government is pushing the Five Eyes group (the US, UK, Canada, Australia and New Zealand - basically the White Commonwealth) to join in their demand that tech companies build in backdoors to encrypted messaging services because that's what's needed to beat the bad guys.

Let's not forget that when Osama Bin Laden was killed he had lived offline for more than a year, had no regular online activity at all, didn't carry a mobile phone and relied exclusively on human couriers to carry his messages, one of whom dobbed him in to the authorities.

Yes, there will be cases where terror cells plot using mobile and fixed line devices and yes, I'd like to see those plans thwarted. Do we need to lose faith in our online security in order to deliver that?

Techblog - US Attorney General calls for backdoor access to messages 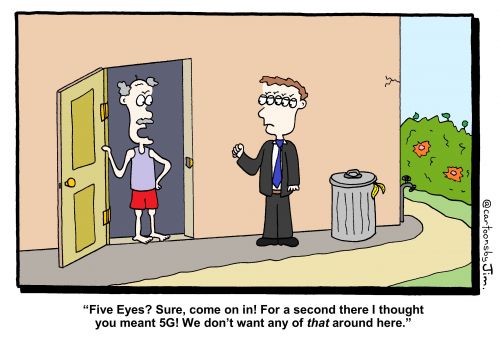 Trump has a beef with France

US President Donald Trump, famously a teetotaller, is considering a tax on French wine being imported into the US.

This is in retaliation for France imposing a new digital tax on large internet companies (typically American ones) that don't pay much in the way of tax in France itself, despite operating there.

New Zealand is also considering a similar digital tax and, indeed, so is the entire OECD, but Donald does seem keen to nip that in the bud by introducing tariffs on goods from those countries that implement such a law.

All of which makes for a very tricky situation because these companies make great use of local infrastructure yet manage to move money around their business empires to avoid paying tax almost everywhere. They provide goods and services that we consume, push out existing operators by offering goods and services at very low rates, yet minimise their tax payments to such a degree that the countries in which they operate are feeling the pinch.

Regardless of US retaliatory practices, this is an area that has to be addressed and quickly. These companies are the oil barons of the 21st century and are making hay while the sun shines. They have all the income, all the control, all the content, all the goods and services, yet pay practically nothing for the privilege.

It was the worst kept secret in the industry - Vodafone and its new owners announced the company would deploy 5G services in four main centres (including Queenstown because over summer there are a lot of high net-worth individuals down there) using existing frequency ranges thus stealing a march on competitors Spark and 2Degrees.

One thing became clear during the event: 5G is really all about machine to machine capability. We humans are probably OK with 4G speeds and feeds.

The use case for 1Gbit/s connectivity is great if you're backing up content, sharing video files and all the rest of it, but for most of us, using consumer-grade devices on the go, we're probably OK with what we've got. Sure, faster speeds will be nice, and we'll all be out there buying new phones I'm sure (we always go out and buy new phones) but the real driver for 5G isn't about phones at all. It's about smart homes, about smart cities, about tele-health, about remote piloting of equipment and about the Internet of Things.

I have been scathing of IoT in the past and will continue to be as long as it's about toasters with chips in. I don't need a toaster with a chip in it, but I do like the idea of my fridge ordering wine when I run out. I don't care terribly much if my car tells its mechanic that it's feeling poorly but I really do want to know if there's congestion in my way on the trip home after work. Current technology can do that - 5G makes it instantaneous and real time.

Vodafone's choice of Nokia as network provider is paying off, of course. With Spark stopped in its tracks by the spy agency over its use of Huawei (and 2Degrees presumably in the same camp), Vodafone has an opportunity to really charge ahead and deploy 5G kit far and wide.

Of course, first it'll have to deal with the fake news-reading anti-vaccination crowd who see 5G as yet more evidence of a World Gonne Madde but hopefully they won't be able to derail it too much, although I'm told local councils are getting very nervous about allowing cellsites to be built and that's a real problem.

But before we get to that, some myths about 5G need to be busted.

No, it won't kill all the bees. Our use of pesticide will do that.

No, it doesn't require thousands of new cell towers be built in order to deliver connectivity. Initially 5G will be a case of swapping out kit on existing towers and in the future may require more sites but that remains to be seen. The idea that thousands of towers are required is based on future 5G technologies, mostly millimetre wave (mmWave) which is so low powered it doesn't pass through glass or paper and can be blocked by waving your hand in front of the transmitter. I doubt we'll even see that deployed this side of 2025.

No, 5G isn't using the same technology as the CIA's secret mind control ray (no, seriously, I've been asked about that) or the crowd-control microwave heat ray technology and no, it wasn't tested on babies. And no it won't give you cancer or brain tumours.

Yes, it will disable the vaccines the secret government programme is squeezing into your diet through its 1080 fluoride chemtrail operation.

And yes, it will be faster than 4G.