It's time for a quick recap on what Facebook has done to make sure we never see the live broadcast of a murder again: nothing.

But the social media giant that likes extremists content (that's a pun but it's also a thing) has found time to fight for truth justice and the Facebook way on another front. Anyone posting content about Facebook which Facebook thinks isn't true gets a quick Facebook debunking to explain that various hoaxes and rumours aren't true.

They've even given the program they use a fancy name - Stormchaser.

But wait a gosh darned minute! If they can do this for nasty old memes criticising Facebook surely the social media giant could do it for other things, like fascism, far-right hate speech, neo-Nazi organisations and much, much more.

As the kids say: Lol.

Facebook also has other programmes of work including the ever popular "let's get a PR company to monitor our customers' perception" and other things but it's Stormchaser I particularly like because it's so blatantly able to be used for exactly the kind of work Facebook says would be impossible.

Facebook isn't alone in treating this whole "people hate us" as a PR exercise. It's spawn offspring Instagram has instituted a new system that checks out what you're typing and pops up to say "are you sure you want to post that?" when you're writing "Paul is an egg and should shut up and stop annoying me in school". Basically it's Clippy but instead of helping you write your CV it helps you avoid being a bully.

Nice first step but really? Is that all you got?

"Our primary focus is on addressing the risks of offline harm, and research shows that dehumanising language increases that risk."

This hasn't done much to move the dial on whether Twitter is doing enough to stop, for example, actual neo-Nazis from abusing people, fake news from being circulated ever faster or the coordination of white supremacy groups using Twitter as an organising force.

But I'm sure once these companies have sorted out their own image problems they'll get right on that. 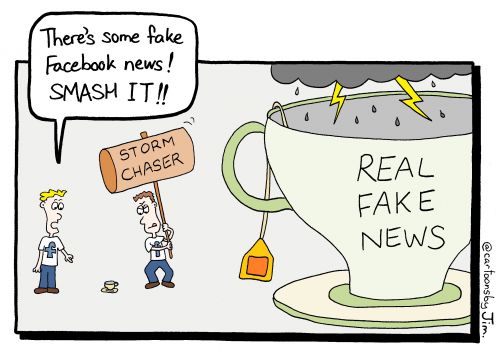 So the EU's privacy law (the General Data Protection Regulation) has its first serious scalp - British Airways managed to (whoops!) that managed to compromise half a million users' data including credit card details, names and addresses and so now faces a penalty of £183.39 million as a result.

A similar incident in New Zealand would result in a fine of slightly less than the lawyers in the case would all get paid. (I'm being facetious - I don't actually know, but the fines are tiny).

The GDPR has made for an interesting game of "spot the useful GDPR statement" on various websites. Basically if you click on a website that's based in or around the EU you're likely to get a thing (typically a banner) that requires to you to click on it before you can proceed - an active, explicit action. This is required because the site will be gathering information on you and if you're in the EU or an EU citizen, and as such you should know what the site is up to, how it will handle your information and why it gathers said data.

The second part of that is proving to be interesting… any website that gathers data around EU citizens should, by EU law, have a similar process. That includes non-EU-based sites.

Having a quick scroll around the New Zealand sites I use regularly I find very few that have an explicit GDPR action. Most have an implicit statement (such as ASB's "If you are located in the EU, you may have rights under the EU General Data Protection Regulation.") and frankly as a sometime EU citizen (the passport's still valid, you know) I'm not sure that quite cuts the mustard.

But it'll be a while before the EU comes calling. They've got much more interesting fish to fry, like Google and Facebook who are of course based in the EU (Ireland, if I'm not mistaken) when it suits them.

Ideally of course our own laws would be strong enough to ensure that we have good cyber-protection in place so no company here ever needs fear the Kiwi equivalent of the GDPR. But as it stands not only are cyber-incidents on the rise, our select committee review of the current act came back with some fairly limited changes.

Here's hoping they re-review it before it's too late.

Gee, where to from here?

I've got a splitting headache and it's probably from all the radiation I've been exposed to.

Actually, it's more likely to be from having to deal with people who think phones will give them cancer unless they buy special bracelets that block the "harmful" radiation but let through the "good" radiation so they can both oppose cellphone network deployment AND continue to use their cellphones without any sense of irony whatsoever.

I've been arguing with these folks for some time and I know you know this because I tell you about it on a regular basis. You're like my safety blanket, my escape valve, my trusted counsellor to whom I can divulge my inner most secrets. Thanks for that.

But thankfully I'm not on my own. The Science Media Centre has a lovely Q&A about the potential issues with 5G network deployment that is tremendous to see and I'll be using it on a regular basis for the next few months.

The Centre interviewed a handful of scientists who work in and around the issues raised by 5G opponents who can talk to some of the key points. Scientists who have studied the problems or who are familiar with how science works.

One in particular, Keith Petrie who is Professor of Health Psychology at the University of Auckland, talks to the issue of electromagnetic sensitivity and says when sufferers are tested they can't tell whether an EMF field is on or off. He calls this the "nocebo" effect:

"The symptoms that people report are a result of the nocebo effect" that is, the opposite of the "placebo effect" and by which he means the more you read about possible side effects, the more likely you are to think you're experiencing them. A hyperactive hypochondria, if you will.

"There is also some evidence that media stories about sensitivity to electromagnetic fields can increase symptoms being attributed to such exposure."

Only one scientist raises a real concern about 5G deployment - Bruce Hartley Systems Engineering Manager for Metservice is concerned about possible impacts 5G might have on weather forecasting.

This isn't as strange as it sounds and is something the radio spectrum team at MBIE will have to consider before issuing any licences.

Initially, 5G will be deployed in the 3.5GHz band. That's not too far removed from current 4G licences and won't pose any problems.

Hartley says any issues will arise in future 5G deployments both here and overseas that are proposed for the 28GHz band.

This much higher frequency is very close to the 23.8GHz water vapour channel that the weather satellites look at to see how much water there is in the atmosphere.

"It is normal for transmitter equipment to produce leakage, but this needs to be controlled by manufacturers and managed by regulators to minimise disruption. The leakage from one transmitter is not normally an issue. The problem occurs when many devices are transmitting at the same time and within the view of the weather satellite receiver."

We've seen what happens when one network leaks into the bands operated by other companies - Telecom's first attempts at a GSM network did this, swamping both Vodafone and 2Degrees' networks in and around Auckland. It took a court case to get Telecom to put rate limiters on its towers and stop the interference and something like that will be necessary to avoid bleeding into the 23.8GHz range needed by meteorologists.

As Hartley says, "weather satellite receivers are passive and the signals being monitored are coming from water molecules in the atmosphere. This channel cannot be changed and there is no way to amplify the monitored signal above the accumulated leakage."

But that aside, if it's health impacts you're looking for, you'll be sorely out of luck. Despite the thousands of research papers, the millions of words of concern written about the issue and the incredible number of users of mobile devices, there simply isn't any sign of any link between mobile phone networks, their devices and users' health.

Feel free to let everyone know.

I've been trying to find a definition for "hate speech" and haven't been able to locate one yet.

Do you have anything workable?