As someone much funnier than me said, good luck getting your parcels delivered if you live in Saudi Arabia for the next few … decades.

News that Jeff Bezos's phone was hacked came out in the middle of last year. Now it's becoming apparent the hack took place after he received a video file ostensibly sent to him via Whatsapp from the  (let me just check my notes here) Saudi Crown Prince Mohammed bin Salman.

That's right, this is the equivalent of Prince Charles abseiling into your house to punch you on the nose and steal the last Toffee Pop before running off laughing like a loon.

The prince, or MBS as he apparently likes to be known, was chatting over Whatsapp with Jeff about plans to build a datacentre for Amazon in Saudi Arabia. Putting aside for the minute the notion that this is how business is conducted by grown, adult men in the 21st century, that all seems straight forward enough. But Amazon isn't Jeff's only gig these days. He also owns the Washington Post newspaper and the WaPo as it likes to be known has been on something of a (well, call it what it is) crusade to out Saudi Arabia's darker side. Having accessed his phone the hackers, whoever they were, managed to get enough information to leak Jeff's extra-marital affair to a rival publication thus putting Jeff in the firing line for the world's most expensive divorce. An outspoken journalist at the Washington Post was also murdered inside the Saudi consulate in Istanbul.

MBS had bought into a software company that specialises in this sort of thing and uses Israeli software designed to upload contents of a smartphone without the user being aware. Check out the link below for the tech details in the security company's report. It makes for an entertaining read.

All of which is a long winded and (frankly) astonishing tale designed to encourage you all to make sure your security is up to date, that you don't engage in business-grade communications via a social media platform and (if this needed saying of course) beware sheiks bearing promises of tax breaks. 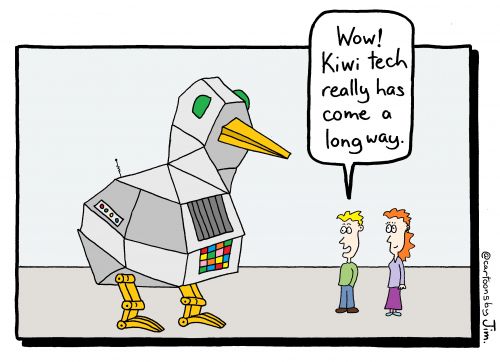 On a more positive note, the year has started with a flurry of announcements about Kiwi tech start-ups raising millions in funding to further their plans for world domination.

For years it's been hard work getting funding for Kiwi tech start-ups. International investors seemed shy about buying into software created in a far flung corner of the world and local markets haven't exactly fallen over themselves to support the tech sector. Most start-ups were self-funded and when they tried to get serious ended up either collapsing or being bought out by foreign interests.

Now however we've seen Spoke Phone raise $7 million, Imagr raise $14 million and Soul Machine's Series B raise saw it walk away with a cool $57 million. That's not to mention the high flyers from late last year that include Straker Translations, Parkable and Aroa Biosurgery to name but a few.

It's great to see Kiwis building world-class companies but just as importantly I'm very pleased to see Kiwi investors getting behind these opportunities. Sure, a lot of this money comes from offshore but we've got to start somewhere and this speaks to me of a maturing of the tech innovation sector in terms of investment opportunities.

It's not always been this way. Many will remember, and possibly have been burnt, by IndraNet in Christchurch which seemed to perennially be seeking more investment money for products that didn't ever quite materialise and of course there's the splendid tale of Zach, the medical AI that turned out to be some guy in a room Googling for answers (or something very similar).

Let's have more of the series players and less of the madness in future, eh? Who knows, we might even see serious institutional investors getting involved, just like Infratil did with Vodafone.

Where to now for social media?

After the maelstrom of last year I'm sure the social media giants are looking forward to a relatively calm 2020 with fewer calls to have them broken up or regulated and less interest in their taxation affairs.

The two big events of the year - the US and New Zealand elections - are likely to be largely fought out via social media so it's imperative we understand how these platforms/publishers work, what they're sharing and not sharing and whether or not we can rely on them to abide by local laws with regard to election spending and the like.

So far none of that seems likely.

But globally the worm has turned and while some democracies remain in trouble, a number of jurisdictions are starting to really take these issues very seriously. When voting, taxation and the fourth estate are all under pressure even reluctant-to-act governments take an interest. Who knows - maybe 2020 is the year we sort out the thorny problem of what to do with social media?

NY Times - The Apps on My Phone Are Stalking Me (PAID)

BBC - Deepfakes: A threat to democracy or just a bit of fun