The Ghost of Christmas Past

So how has the year been for you? The last 12 months has been something of a roller-coaster ride for many with the Christchurch mosque attacks, the volcanic eruption and in the tech sector we've seen a few key themes emerge throughout the year as well.

A trawl through the Techblog archives shows me I'm repeating myself, and saying the same thing several times. The absolutely lack of compassion from the likes of Facebook over the mosque attacks and their refusal to change their business models to make it harder to publish video footage of mass murder is one trend that has dominated the year. While it's one thing to accidentally publish materials, as Google has done with its zeitgeist email, it's something else to monetise terrorism the way Facebook has, and its refusal to back down may well be the final straw that breaks the regulators' backs. Countries around the world are calling time on Facebook's unwillingness to abide by local law, pay local tax, support local regulations and operate alongside the rules of society. It's not just the live video feed, it's also the lack of transparency around its advertising models and lack of responsibility around user privacy that may well see the company knocked off its perch in a number of jurisdictions.

Facebook isn't alone in this but it is by far the biggest offender. I hope they throw the book at you.

We are also getting a new privacy law, one that is badly in need of an update. Sadly, we won't see a GDPR - New Zealand edition, complete with its really big stick fines (4% of turnover (not profit, turnover) makes even the biggest conglomerate sit up and take notice). Instead, we are still working towards a more gentile, refined, "let's all work together" model that has a maximum fine of $10,000 and which will have to be re-overhauled in the next couple of years I suspect.

Sure, it's good that we are encouraging and nurturing but when a company can lose control of personal data on the kinds of scales we've seen this year (mega-data breaches with hundreds of millions of affected accounts) we do need something a little more robust.

The new Act should be in place next year.

We're also starting to see more attention being paid to the electoral process and to safeguarding our democracy.

This is a very timely move considering what's gone on in the UK and US markets, with fake news, micro-targeted advertising and associated overspending and a willingness to tell lies in your advertising.

Facebook is again at the heart of the storm with its blanket refusal to fact check politicians' posts and a willingness in some quarter to post outright fabrications.

But advertising aside it is the fake news that really strikes fear into the hearts of watchers. Fake news about what other political parties stand for, fake news about what politicians said, fake news about vaccines and about cellphone networks… we have found ourselves in the midst of a revolution in publishing that means truth is not only optional, it's barely even considered any longer and we are all suffering as a result.

Which brings me on to the role I appear to have been playing as "5G spokesman". I am not in the employ of the mobile phone companies, Big Radiation isn't paying for my laser eye treatment, and I'm not going to be given a cut of the sales of 5G devices in the New Zealand market. I am a user of mobile phones (and microwave ovens, and wifi, and garage door openers and all the rest) and I've long been an advocate for more connectivity, especially in remote and rural parts of the world. Connectivity options are nice to have but connectivity itself is essential and all too often you can drive across New Zealand unhassled by any form of communications service whatsoever.

The advances in phone technology and usability mean I can send my kids a map of my location, I can check in with them to make sure they're OK, I can summon help in remote parts of the country, I can work from home instead of the office, I can find out about things I really care about in seconds and I can access all the art, history, literature and culture of the world in moments, courtesy of a device I can fit in my pocket.

Yet for some it's more important they be able to block all of that because of a video they saw on YouTube about bees.

Thankfully that ship has sailed. Here's to a future where I don't have to explain why cellphones won't zap your brain ever again.

Lastly there is one common thread this year that I'm very pleased to see. It's about the growth and maturation of the ICT industry. We're starting to really crank that engine and more people are looking to ICT for employment and opportunity than ever before.

Sure, we don't have the national CTO we were promised, sure, we don't have hundreds of billion dollar businesses (yet) but we do have a strong foundation and a growth curve that makes me smile. This year we've celebrated a lot of success in the ICT sector and finally we're starting to move on from "oh you work in IT" to "oh, you work in IT!" and that's great to see.

Techblog - Facebook forced to explain itself some more (March)

Techblog - Little and Large: the justice minister and the search engine (July) 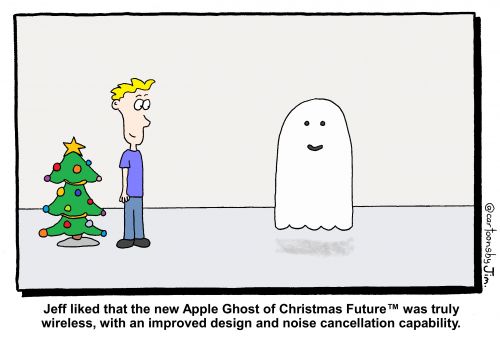 The Ghost of Christmas Future

The future certainly isn't what it used to be, quite literally. There's less of it to go around these days. Back when I were a lad the year 1979 sounded so science fiction and the year's 1984 and 1999 were ridiculously distant.

Now that we're about to move into 2020 (where's my underwater city and moon base, eh?) it's all so pared back. No flying cars (but yes to drones), no FTL travel (but soon electric vehicles for all), no moon base, (although New Zealand does have a space programme), but we do have 5G, UFB, SaaS PaaS and IaaS as far as the eye can see, and the new Apple AirPod Pros really are science fiction come to life.

There's a lot going on under the hood this year and while we're bogged down with climate issues, with politics really being more entertaining than I for one am comfortable with, and with societal changes that should result in a better world if we can keep it together long enough to get there, there's plenty of upside.

Not only does New Zealand have a space programme and a growing ICT sector but we have the basic infrastructure that's badly needed if we're to build and grow as an ICT nation. We have the UFB, we have RBI and RBI 2 projects bringing faster (but not quite fast enough) broadband to the regions, we have another mobile network race to deliver more service for less money (yay for crazy economic models) and we have an education system that is starting to recognize the need for ICT builders as well as users.

It may be that 2020 sounds like the future to my aged ears but to these kids it's business as usual and that's got to be a good thing.

Techblog - We could zoom to the Moon, or float out to Mars

Reseller News - What will be the 10 trends impacting IT infrastructure and operations in 2020?