Typically at this time of year we indulge in a fond look back at the previous 12 months.

Reader, I could not face it this year. What a screaming hot mess of a year both locally and internationally, on all fronts. Tech, politics, economics, environment, civility - you name it, and 2019 was the year of crazy change.

Thankfully contributor Sarah took up the mantle and shared her top ten lists for the year of living dangerously and indeed for the decade as a whole.

So much has changed since 2009 and yet we still seem to be fighting the same battles. Ten years ago we had just started to see the iPhone's impact, instead of 5G we were gushing about the potential of soon to arrive 4G. Nobody took Facebook terribly seriously, Steve Balmer was still CEO at Microsoft and it all seems so long ago now.

And this year alone has been one bookended in tragedy, caught between the Christchurch terror attacks and the Whakaari/White Island eruption. Really it puts everything else into perspective.

Techblog - Top 10 in tech for the decade

Techblog - Top 10 in tech for the decade (continued)

Instead, I had a look to what's coming up next, or rather, what I'd like to see next year.

There are a number of issues bubbling along and we should land at least a few of the in 2020, although as my wife often reminds me, when I make a to-do list for the holidays I should then cross off half the jobs because I'll only get started on a handful and complete hardly any (sorry about that).

But the Venn Diagram of things I'd like to get done does have a sweet-spot in the middle and it focuses largely on social media.

The role of social media in our civil discourse is an obvious one. Mainstream media is melting under the move to digital content and while I care about our broadcasters in a more abstract way (I would love to see more local comedy and drama content produced but they don't seem to have the cash to do it), it's the news media, the Fourth Estate, that I worry most about. Social media is killing the very idea of journalism as we know it and that's a major problem.

It's also making money out of sharing content that should never be shared, but apparently can do nothing about it! This I find hard to believe but somehow it's become the norm to say "what do you expect, that [social media giant] will monitor every stream/check every judicial report/fact check every statement?"

But social media is also killing privacy as it blunders from one drama to the next. From hoovering up our demography and monitors our every online move to forgetting to protect said data and leaving it on the doorstep for anyone to take, social media has to do more to serve us, the product it sells, or it's all over for them.

And then there's our democracy.

Social media doesn't care if we vote, who we vote for or whether we are fully informed of our voting rights, requirements and understanding. Instead, it takes money and pushes whatever lines of attack anyone wants to deliver without recourse to our local laws and requirements or even to what is good for society as a whole, in even the most abstract way.

And let's not forget the tax situation either.

Next year must surely be the year social media is held to account. We need stronger laws and we must hold these players to account for their actions. Social media platforms can not pretend they're not publishing information provided by their user bases - they've moved from allowing content to be placed in a chronological order to deciding what will be put in user's news feeds based on "an algorithm" and in doing so have taken up responsibility for that content. It's time we held them to account for it.

So Santa, if there's anything you'd like to pop under the tree this year, let's make it a robust process for handling the behemoths of the tech sector.

And to all, a good night. 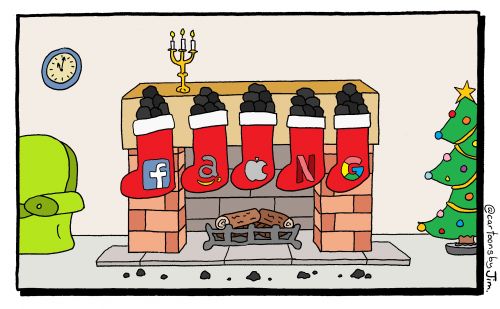 It was twenty years ago today

Well, not quite and there certainly wasn't a band, although I'm told there were fireworks.

In 1999 the IT industry sat on the edge of one of those most binary of days - a deadline that could not be moved.

Y2K had emerged into the mainstream consciousness only a few years earlier but was now approaching like a freight train. The millennium bug (which wasn't a bug and wasn't about the millennium - check your calendars, folks) meant a lot of tedious combing through lines of code in embedded systems built years earlier in almost-forgotten defunct languages - almost exactly as if every programmer's COBOL Christmas wish had been granted.

And work they did - all around the world, all around the clock, because once midnight rolled around that was that - 99 inexorably became 00 and who knew what that would do.

Everything needed to be tested. I spoke to someone testing patient controlled pain pumps in hospitals - the units in use would have delivered a blast of morphine just before midnight and instead of locking the user out for a set period of time would have allowed a second, potentially damaging blast just after. They were unfixable so out they had to go.

From hydro stations to traffic lights (both thankfully so antiquated they were mechanical) to billing systems (ha ha, you guys were screwed) to the early days of Enterprise Resource Planning (ha ha, you guys are still screwed), everything needed to be checked over thoroughly for date dependence.

And then it was time, or rather no time left at all. The clocks struck midnight, starting in New Zealand.

I was ensconced at the TelstraClear building in Auckland's Smales Farm as they'd kindly invited me in to use the multiple redundancy lines of communication and power supply guaranteed by generator in case it did all go sideways. They checked on me, periodically, in my bunker as I talked to contacts around the country and took calls from journalists around the world. They all went up on the roof to watch the fireworks - I sat on the phones.

In Auckland, it rained, and I'm told the Gisborne sunrise was a damp, squidgy affair that upset tired tourists.

Of course, nothing happened. Too much effort and energy had gone into making it a success. In the days and weeks and months and years that have followed I've often had to defend the Y2K workers against accusations that it was all a media beat up. It wasn't - not entirely - but it was that rarest of things: a tech project that came in on time.

I've heard of legal actions brought against those IT providers that still let one through to the back of the net, but nobody's ever confirmed real-world problems. The planes all flew and the bills all still went out.

Hopefully, on the (I can't quite believe this) 20th anniversary of Y2K your New Year break will go a little more smoothly. Don't forget your sunblock, take your time on the roads amidst the seasonal crazy and and we'll see you all safely back on deck early in 2020 - a year that promises to be The Future in so many ways.

The Spin Off - The Side Eye: Bugged Out

Huge thanks to Paul Matthews for letting me prattle on this year, Sarah Putt for keeping up the quality quotent and to Jim for the fantastic cartoons all year long. See you on the other side!

' .. they've moved from allowing content to be placed in a chronological order to deciding what will be put in user's news feeds based on "an algorithm" and in doing so have taken up responsibility for that content.'

Certainly made me think about what is evidence of 'taking responsibility for', particularly when an algorithm is doing the processing. Presumably when some kind of significant human value judgement is involved in creating the algorithm. Beyond chronological, alphabetical order etc, as you indicate.