Brislen on Tech: Time for tech exports to shine even brighter

Well, it's a rainy day for the New Zealand economy. But just how rainy, and will it fill up the reservoirs while it's pouring down?

Typically, the New Zealand economy is a robust beast. We have the 51st largest economy in the world with a healthy (but not too overly hot) growth rate that has been ticking along nicely in the 3% bracket for some years now.

In the Global Financial Crisis (GFC) the economy contracted but recovered quickly, avoiding the worst excesses of austerity measures seen in countries like the UK and most of the EU. Instead of closing libraries and reducing services, New Zealand weathered the storm and moved back to growth quite quickly.

This time, round our fall is predicted to be much deeper and faster to hit us, followed by a relatively slow crawl back to normality. 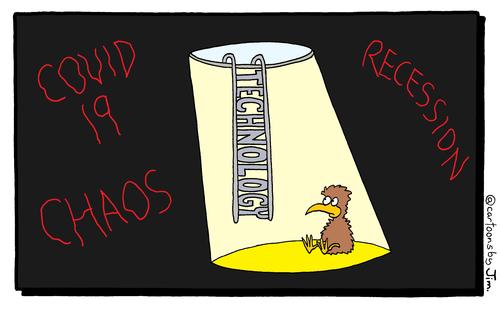 The economy contracted by 2.7% in the GFC over the course of 18 months, according to Westpac chief economist Dominick Stephens, whereas this time round Westpac predicts a 17% decline in half a year.

That's a heck of a wallop to a trading nation that relies on our export capability to lead the way.

Tourism is unlikely to restart properly for several years. International education - a key export earner - is likely to be on hold for months yet, possibly the rest of 2020, leaving a hole in our budgets like nothing before.

But how big a hole are we talking? What does tourism (our second biggest export earner) and education bring in?

Statistics New Zealand has a fantastic page devoted to the history of our economy and which segments deliver what value to our economy.

In 1972 our gross domestic product (GDP) was worth $6.855 billion of which the largest contributor was (naturally) the primary sector weighing in at $660 million. Retail trade followed at $512 million closely followed by food, beverage and tobacco production (no, seriously) $491 million for the year.

Information, media and technology came in at number ten on the hit list bringing in $241 million to the economy.

Agriculture was still number one in 1982 with just over $2 billion in GDP (out of a total of $29.35 billion - a healthy rise in ten years) accounting for 10% of GDP. But that was the peak as far as agriculture was concerned - by the following year it had fallen to fifth place, bringing in just under $2 billion, or 8% of GDP.

Fast forward to the GFC in 2009 and the New Zealand gross domestic product was sitting pretty at $189.6 billion with "professional, scientific and technical services" our biggest component, accounting for $14.8 billion. Our love of property saw "owner-occupied property operation" creep in to number two spot with $12.6 billion.

I warrant this is not how we think of ourselves as an economy.

Today, 65% of our GDP is based on something to do with "services" and 72% of us are employed in that field, whatever it is.

All of that of course is in doubt following the 100 days of lockdown (more or less) and the slow, shaky recovery we're seeing today.

Last year was the strongest year yet for tech exports and talking this week with TIN100 founder Greg Shanahan we reached a Game of Thrones style conclusion: chaos isn't just a pit, it's a ladder, and the tech sector can rapidly rise up through the ranks to support the New Zealand economy as everyone else gets back up to speed.

In terms of exports, primary produce is still number one, with tourism typically just behind. But hot on the heels of tourism at number two comes the ICT sector and even without COVID-19, tourism was likely to be knocked into third place this year or 2021 at the latest, according to the TIN100 report.

Tourism simply wasn't growing fast enough to keep up with the tech sector. While tourism exports brought in $11 billion last year (to the tech sector's $9 billion in exports), tourism showed no growth while tech grew at a blistering 11% year on year.

While tourism is at trafficking at zero for at least the next year, possibly longer, the tech sector shows no signs of slowing down nor any need to do so.

In the US, the companies that are surviving (or rather thriving) are in the tech sector. Everyone needs tech - it empowers every industry from primary sector to services and beyond - and the potential growth is still there on the table for us to grasp. We haven't needed massive government bail-outs, we haven't had to shed thousands of staff and we haven't had to shutter factories or close offices, unless it's because the staff have decided to work remotely.

The US tech stocks are holding up well. The S&P500 in the US is dominated by the five tech sector (Alphabet, Apple, Amazon, Microsoft and Facebook) constitute 20% of the entire index.

Some of that is just the stock market being bonkers and being even more removed from the real economy than ever before, but a large part of it is our utter reliance on tech for everything else we do from entertainment to retail shopping to the oh-so important services market we all take part in.

This is the year the New Zealand tech sector can and should shine. Here, we're not just talking about ICT but the wider tech sector that includes agritech, manufacturing, digital services like film making and gaming and much more besides.

We don't need to strip mine our national parks, we don't need to convert forests to pasture, we just need a few more cubicles and thousands more staff and we can absolutely deliver growth and economic sustainability at a time when the nation needs us the most.

If you haven't already filled in your TIN survey for the year I'd strongly urge you to do so for two reasons. Firstly, we need a clear and accurate picture of how well the sector is doing in the face of impending economic meltdown and secondly so we have solid data to wave at government and at the banking sector so we can absolutely hold our heads up as the second largest and fastest growing market segment in the country.

Without wanting to pick on the Westpac economic team, the only time the term "ICT" shows up in a search of the economic assessment document is in the word "restrictive" and that seems to suggest they haven't thought about the role ICT can and does play in the New Zealand economy.

This is an industry whose time has come.