Brislen on Tech: The fifth estate

Welcome to the new look Brislen on Tech - an in-depth look at one of the big issues in the tech sector. We'd love to hear your thoughts - add a comment below.

In the last decade two major factors have changed the way we use the internet.

The first is the rise of the mobile device as a primary means of access. The introduction of the iPhone and the subsequent boom in mobile tech has changed the IT landscape like nothing else since the introduction of Windows itself. Today there are more computers in our pockets than sitting on our desks and for the next generation coming through the idea of buying a desktop PC or a television is as strange as buying a horse and cart would be to our generation.

Mobile tech hasn't just changed our computer buying habits - it's revolutionised our approach to the web itself (app based access is now by far the predominant approach) and that in turn has changed the industries reliant on digital information. Media, sport and entertainment, commerce and even employment itself - these are all in turn being re-structured by our access to ubiquitous mobile tech.

But at the same time we've seen another huge driver that has reshaped our lives - the rise of social media and the new world of information sharing.

Social media is now the dominant source of information for users all around the world. In 2018, Hootsuite's Global Digital report put the world wide penetration of social media at 42% - more than 3 billion people describe themselves as active users of social media, sweeping all other media formats aside. 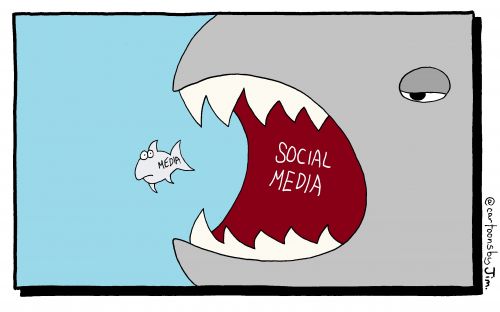 Forget Netflix or sport, forget newspapers or television, social media is now the dominant media driver in every country around the world, including New Zealand.

In 2018 market penetration of social media in New Zealand sat at just over 74%, with a growth of 9% year on year. We spent just shy of six hours a day online connected to social media of one form (messaging and chat) or another (social networks) and our top ten most visited websites are a cornucopia of social media brands: Facebook, YouTube, Facebook Messenger, Instagram, WhatsApp, Snapchat, Pintrest and Twitter among them.

The impact on professional media outlets cannot be overstated.

At a time when print publishers like NZME and Fairfax were beginning to struggle anyway, and with television audiences also plateaued or in decline, the arrival of aggressive competition from outside the market segment was devastating to behold. Readership plummeted as eyeballs were lured to the exciting new world of digital content and the response of most publishers was slow and disjointed. Content was given away for free, to a competitor that wasn't taken seriously until far too late in the story.

Worse still, the departure of the readers and audience took with it the advertising spend that had traditionally shored up the costs of running a newsroom. First classified advertising and employment advertising evaporated seemingly overnight, moving entirely from print to digital with the launch of TradeMe, eBay and other similar ventures, but display advertising wasn't far behind. In 2018 the Advertising Standards Authority report into ad spend put the market total for New Zealand at $2.677 billion - with television (21.93%) and print (22.86%) both being soundly thrashed by digital at 41.58% market share. Even as spend increased it was digital advertising that grew while the others withered on the vine.

The draw of digital was twofold - audience numbers and measurability. As the audience dumped traditional media outlets for social media the social media companies enabled advertisers to micromanage their spending, targeting regions, income, gender, age, and even voting behaviour. By tapping into the rich vein of demographic data, companies like Facebook and Google through its YouTube subsidiary were able to promise instant feedback on a campaign's progress, the ability to turn up spend or redirect it as required, on the fly and a full breakdown of who had clicked through and made a purchase.

But while doubt remains about the veracity of those statistics, and whether or not social media companies have reported activity accurately, the impact on newsrooms has been catastrophic.

Publishers responded to the onslaught by cutting staff numbers ruthlessly (usually in the newsroom) ironically reducing the appeal of newspaper content even further. For those casual readers who might pick up a paper to do the puzzles or check out their horoscopes, the internet offered much richer content, while those who remained as readers were offered a barrage of wire copy news that many found they'd read online the day before.

Social media rushed in to fill the void.

In 2018, social media websites were the top four busiest sites in New Zealand, followed by TradeMe. Stuff comes in at number six and the New Zealand Herald at number nine on the list. TVNZ and Mediaworks don't rate in the top ten at all.

The number one site - Facebook - sees 43.2 million visits per month by Kiwis who stay for 11 minutes 43 seconds and look at an average of 14.4 pages.

The New Zealand Herald, by contrast, attracts 8.5 million visits per month, for an average of 5 minutes 31 seconds and only 3.7 pages visited.

Stuff was sold to its CEO earlier this month for a dollar, such is its previous owner's belief it the company's ability to survive.

Facebook and the other giants want to keep users on their site for as long as possible, offering up content they've asked for in the form of family and friends but also content users might be interested in, based on the groups they've joined, posts they've liked and comments they've made.

And that is where social media's modus operandi diverged from traditional media while seemingly offering similar if not exactly the same content.

Professional media outlets abide by certain agreed upon rules - in some cases written into law - about defamation, libel, slander, about balance and equity of reporting. They have codes of conduct and processes whereby content can be challenged and appeals heard.

Social media emerged with none of that. Instead, it had one overwhelming urge - keep the users on the site at all costs regardless of the content being served up.

Professional media serves many purposes. For some it's the home of news and current affairs. Others read for opinions and humour. For some it's news about the local events that are coming up or the latest trends in fashion or food, travel or renovations. For many it's about sport and entertainment and for others it's about the crossword puzzles.

None of these really matter in the long run but the one role that professional media does fill that is vital is that of the fourth estate.

Our democracy is based on largely on a voting population making informed decisions about who they will vote for to create a government which runs the country for a period of time. Typically, the role of government is broken down into three areas, or estates. We have the executive branch (if you're American, the President but in New Zealand the elected body we think of as "the government"), we have the parliament (including the Opposition) and we have the judiciary, whose role is to enforce those laws created by the government of the day.

Keeping it all in check has long been the role of the media - the fourth estate - as a mouthpiece for the public, as a way of sharing information about those in power with those not in power. People might buy the paper to do the crossword but they want to know that the people in charge (whether it's the local council or the national government) aren't corrupt, are doing what the people want, aren't destroying the economy or the environment and a host of other equally important questions.

The media's role has, if anything, become even more important with the advent of digital technology and the ability today to monitor and micromanage populations in real time. Power corrupts, and absolute power corrupts absolutely and today's governments have access into their citizens' lives in a way that no government has ever had in the past.

Unfortunately, social media has little time for such interests. Social media doesn't care whether a government is corrupt or brutal, whether laws are broken or passed because social media companies only want to know about how long the readers stay on the website and what can be done to encourage them to stay a little longer.

The upshot is a surge in fake news, in conspiracy and extremist content and in bot armies - fake accounts that pump out ever more outrageous commentary so as to engage the readers' attention. If you've ever found yourself arguing with someone online about a ridiculous point of view or conspiracy theory it's entirely possible you've been played by a bot that just wants to keep you online and chatting so someone can sell you something.

Facebook knows this. It knows it's responsible for encouraging extremist content and went so far as to research the impact of its own approach to media, but having found out the truth about its own operation it decided not to act.

Twitter is acting, albeit in a very limited way. It will fact check political posts for accuracy and follow up with a tweet of its own pointing to the facts of the matter if the politician's tweet is particularly untrue. This has already lead to threats of executive action by the US president, and claims that Twitter is interfering in free speech rights.

What Facebook and Twitter and all the other social media offerings won't do is address the very basic fundamental business model that leads to extremist content - the algorithm itself. None of the changes suggested by the social media giants since last year's Christchurch mosque attacks make any difference at all to the algorithms used to encourage users to stay on the site and until that's address directly, either by shareholders or regulators, it's unlikely to change.

The role of the fourth estate isn't written in law. It's not cast in stone and over the decades since printing became commonplace it has taken many forms - town criers, newsletters, newspapers, radio, television, manifestos nailed to church doors. The giants of the previous cycle rarely lead the next. The New York Times is not a successful radio or television network. TVNZ has not transitioned to digital content as the number one player in the market. We've seen the emergence of new professional media outlets like Huffington Post, Boing Boing or The Register and locally, The Spin Off, Newsroom and Business Desk but they are minnows in the fight for their life against the social media giants.

The fifth estate is likely to sweep all before it, but in winning the war the question remains: will it accept the role of holding power to account or abdicate it in favour of a few more clicks?