If you are an Australia-based user of Google's search engine, in other words, anyone who lives across the Tasman and has access to the internet, you may have seen an interesting pop-up on your screen over the weekend.

"The way Aussies use Google is at risk", the pop-up informed users with an intriguing "learn more" icon taking you to an open letter outlining Google's dissatisfaction with a new mandatory code that requires it to share a portion of its advertising revenue with Australian media organisations and newspapers.

Penned by the managing director of Google Australia, the letter doesn't actually mention the Australian Competition and Consumer Commission's draft mandatory code's aim of having digital platforms share some ad revenue with media outlets, but instead suggests a law change will see Google's users' data placed in the hands of those media companies.

"Under this law, Google has to tell news media businesses "how they can gain access" to data about your use of our products," writes Silva.

"There's no way of knowing if any data handed over would be protected, or how it might be used by news media businesses."

The end of free?

Silva ominously wrote the new law would "put free services at risk", suggesting that Google search and Youtube, fabulously profitable advertising-supported platforms, might only be available to those with a subscription fee.

The ACCC was quick to hit back yesterday, with Chairman Rod Sims issuing a statement saying that the open letter from Google contained "misinformation".

"Google will not be required to share any additional user data with Australian news businesses unless it chooses to do so," he wrote.

"The draft code will allow Australian news businesses to negotiate for fair payment for their journalists' work that is included on Google services." 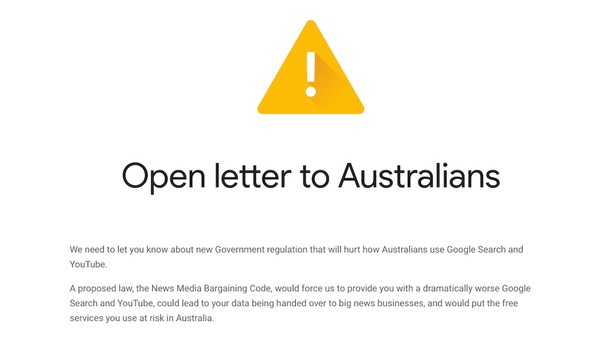 This mandatory code, which is open for consultation until August 28, is primarily about forcing large digital platforms to share some of the revenue they derive from displaying media content on their websites, with the companies that generated the content.

The ACCC estimates that Google and Facebook alone generated A$6 billion between them in revenue in Australia and control the majority of the digital advertising market. The situation is no different in New Zealand, where media outlets fight it out for a shrinking share of the ad market not dominated by Facebook and Google.

But would the mandatory code force Google to hand over more information about its users to media outlets?

In other words, Google and Facebook will be obliged to let media outlets know what type of information it is gleaning from the media outlets' viewers and readers congregating on their platforms. That seems fair enough.

Other provisions of the code similarly request Google and Facebook to "list and explain" the type of information they gather and from what services. That addresses a longstanding bugbear of media outlets, which is that they have no idea how Google and Facebook gather and use data collected on news consumers on their platforms. Other provisions in the code require the digital platforms to explain the seemingly random algorithm changes they make, without notice, that play havoc with media outlets' efforts to reach their customers via third-party platforms.

It doesn't suggest the digital platforms will be forced to hand over more data on users' activities, but to explain how they are using the data they are currently collecting.

"Google's letter is straight out of the monopoly 101 playbook trying to mislead and frighten Australians to protect their position as the gateway to the internet," the chief executive of Free TV Australia, Bridget Fair, told the Guardian.

"We've seen this kind of tactic before from big businesses trying to stop regulators from evening up the playing field so that they can hold on to excessive profits. Hopefully, they will not succeed."

The letter certainly shows that Google is prepared to fight hard to avoid having to strike fair revenue-sharing deals with media outlets. The mandatory code will be introduced into parliament after the end of the consultation period, so may well be passed into law this year.

It has, naturally enough, been enthusiastically received by the Aussie media industry, which hit with declining ad revenue as a result of Covid-19 has had to lay off hundreds of staff, shut some publications and stop physical production of many others.

On this side of the Tasman, Broadcasting, Communications and Digital Media Minister, Kris Faafoi hinted earlier in the year when launching a $50 million support package for our own Covid-hit media, that the government would be carefully examining the Australian code. The Government has previously done very little work in the regulatory space to address the market power of digital platforms.

A second media package is in the works, but looks likely now to be revealed before the election on October 17. Media leaders here are pushing for a similar approach to Australia's, with the large digital platforms required to start sharing ad revenue. In the meantime, the country's largest news website, Stuff, has taken a proactive measure - it hasn't shared a story on Facebook since July 6 as it tries to go cold turkey on the social platform that supplies it a lot of web traffic, but which has simultaneously cannibalised the ad revenue that media companies rely on to stay in business.