Great news - our privacy is now secured. The mega corporations that take our data and sell it to anyone and everyone have agreed to abide by a consistent set of rules including asking us before changing their terms and conditions. They will put security processes at the forefront of everything they do from now on, going so far as to rebuild existing systems that don't seem to cope well. The governments of the world have banded together to create a coherent set of laws that will govern the use of data and ensure we're all treated fairly and with civility. Informed consent is the name of the game and we can all relax now and I'll never need to write another word about it again.

Why yes, I did eat those mushrooms I found in the field this morning, why do you ask?

Sadly, much as I'd love for all that to be true (except for the mushrooms. Who does that?) it's all still a distant dream.

Instead we have Google being fined US$170 million for breaching the privacy of children (CHILDREN) and Facebook admitting it that 419 million phone numbers were stored in an online server that was not password protected.

We cannot trust companies that are required by law to maximise the return on investment to their shareholders to do the right thing by user security unless there are consequences and fines of US$170 million just scratch the surface. These organisations are coin operated - their only motivating factor is the dollar and if you tackle that, you'll get the results you want.

Google is also coming under fire from US lawmakers over the way it acts in general. I'm old enough to remember the US Department of Justice having a crack at Microsoft for its anti-competition tactics - looks like Alphabet is next up for abusing its market dominance. That's no fun for anyone.

On top of all that, the new Privacy Bill is down to its second reading in the House and I have some concerns.

Let's assume the above Facebook issue happened here in New Zealand but beef it up a bit. Let's assume every New Zealand name, address and phone number, along with bank account details and credit ratings were all exposed on a website that had pitiful or limited security at best.

How much do you think the new Bill will fine Facebook in that situation?

The answer is nothing. Not a penny. Because Facebook has explained that "yeah we were a bit slack" and "yeah, it's a total breach gov," the company won't be fined at all. Not a penny.

And if the company stonewalls and refuses to admit fault? How much would you expect then?

Given how much we tell our computers, how much access they have, how much harm they could cause, I really think the new bill should reflect real world levels of potential damage with a fines regime that matches, because I suspect most companies would happily pay the $10,000 and not even blink.

ZDNet - Google antitrust: Are over 30 states about to join big probe into how Google behaves? 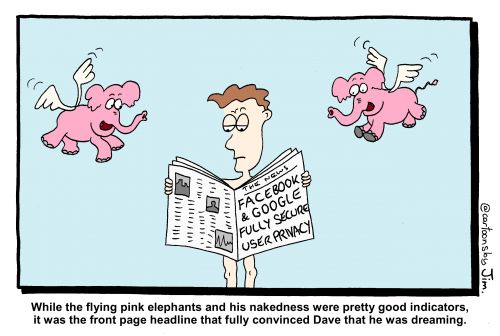 Three separate news stories have given me cause for concern this month.

The first was about some ratbags using a deep fake voice to steal around $250,000 by impersonating a CEO in a call to a subordinate. "Transfer the money to this unmarked account" is the gist of it - it's a phishing attack writ large.

That day is coming and it's much sooner than we've expected and that fills me with concern.

The second story was also about fake news but trying to understand how well we parse information and how well placed we are to cope with it during the next election cycle.

I've talked about this before but it does worry me a great deal. I was interviewed about it for the Stuff story below and was asked if I was worried about the kids coming through having the ability to unpick real from fake. It's not the kids I worry about, it's the over-60s who were never asked to question everything, haven't practiced thinking critically and who seem overly eager to swap mainstream media and formal sources for Facebook and "some bloke on the internet" and their ability to tell fact from fiction. The kids do it every day but retirees? Not so much.

The last piece was around electronic voting and while we've covered the pros and cons of voting online before, this piece made me fall firmly on the side of "let's not do that".

Given the combination of fake news, of interference in elections and the ability to change votes on electronic voting machines, really I'm very happy if we stick with a system that anyone can verify and that involves pens, paper and people.

Stuff - Can Kiwis tell fact from fake news in the leadup to the 2020 elections?

Lawfare - An Op-Ed From the Future on Election Security

In my first couple of weeks as Vodafone's communications manager (wayyyy back in the mists of time) I was called by a reporter at a paper on Waiheke Island.

Why is the coverage so awful, she asked? We have businesses here that are desperate for customers but the reception is terrible. I'm writing a piece about how awful you are.

Well, I rushed around and found some people and got some notes together and went back to her. It's OK, I said, we're going to build two new cell sites in the main area. They'll provide shiny new 3G coverage!

Great, she said, where are they? So I told her and there was a silence on the phone. "But that's the building I work in." OK then, you'll get great reception, I told her.

Not long after that, Vodafone signed a deal with the owner of a bowling green on the island. Bowling isn't quite the popular sport it once was and the club was struggling so having a corporate turn up and rent space on the roof for an antenna was a great way to earn a bit of cash. But word got round, as it does, and the poor lad running the bar started getting death threats.

Death threats. On Waiheke Island. In the 21st century.

Now we're at it again and a Spark contractor, a guy laying a concrete slab, has been physically assaulted for daring to do his job, this time in the Hawke's Bay.

It doesn't matter what you believe about cellphones or cell sites or EMF or any of the rest of it, assaulting someone for laying concrete is not acceptable by any stretch of the imagination.

I see a number of "fans" of the action on Facebook and since I know at least one of them reads this column (presumably the 5G equivalent of whipping yourself) I thought I'd mention it here. It's not acceptable, I hope someone is charged for assault and you should all get out more.

And yes, the local body elections are indeed coming up and yes, there are several people standing for local boards and for councils on the basis that they will stop cell sites being built.

That level of madness and anti-science rhetoric should strike fear into the hearts of anyone who runs a business, wants to communicate with friends and family or who might need to call for an ambulance. I'd encourage everyone to get out and vote and do ask your candidates what they believe in.

Sydney Morning Herald - The science is clear; we've more to fear from baby monitors than 5G

The Spin Off - Your Place, Your Vote

Irish Independent - Fear of 5G: Launch of new phone network sparks talk of health hazards, but do you need to worry? (Free log-in required to read)