It's tough at the top

There's a cycle to successful companies in the tech sector that seems to repeat itself over and over.

In the beginning, you're a start-up. You're lean, you've got no idea what you're doing but something sparks and you're off and running. Suddenly you're in public, you're loud and people love you.

From there you sell product, there's huge demand, the hype cycle kicks in and people line up to throw money at you.

Then you list on the stock market, the media goes nuts, everyone wants a piece of you, you go from sleeping on the office couch to being a billionaire (literally in some cases) and you haven't broken a sweat yet.

But then, the worm turns.

Someone starts to suggest your products aren't as slick as you'd like. Mostly everyone is positive but there's some niggling going on. A competitor might release something similar or there's some noise about delays in shipping. In an irony-free moment, the media might declare you to be "over hyped" and your shares might climb, but at a slower rate.

Now you've got to deal with investors, you can't talk as much about your exciting concepts as you used to and your new board is telling you how to run the company. You, the oracle, the one who Saw The Way when everyone else had their backs turned, are schooled on corporate life.

Now you're at the head of a multi-national. You don't know all your staff, you haven't met anywhere near all of them and you feel yourself losing control of the direction of your company.

Pretty soon other companies are gaining more market share and you're not sought out quite as much so you used to be for comment. You have people to handle that sort of thing for you.

Something goes wrong and you're thrust into the spotlight but for all the wrong reasons and it gets a bit ugly.

And then the cycle is complete. You're the incumbent and the bright new thing is someone in a different business doing something else entirely. You've become successful, and just another company in the field of technology.

Pick any incumbent today and you'll find the challenger from a decade ago. Google, Facebook, Amazon, Apple. Go back far enough and Microsoft was the upstart taking market share off IBM and generally upsetting the world order.

Don't take it personally but it happens constantly and there's really nothing you can do about it except know it happens and ride the wave.

If you're lucky, you can come back on top as the next challenger. Locally, Spark has made a real fist of it with its separation from Chorus and rebranding. It's not the Telecom of old any longer.

Despite Apple still selling a bajillion phones and tablets, sales were down 15% year on year in the all-important Christmas quarter and most of that was missed sales in the iPhone division and a decline in revenue from its Chinese market.

CEO Tim Cook admitted that perhaps price cuts were in order, and given the flagship iPhone XS Max device stars at more than $2,000 locally and can go all the way up to $2800 (which is more than Apple's popular MacBook Air) then yes, some reconsideration might be in order.

On top of all that, Apple also ran smack into the mother of all security bugs - one which allows callers to listen in to a recipient before they answer the FaceTime call - and one which brings into doubt Apple's number one claim to fame - that it knows what it's doing and users can just get on without having to manage their device.

Some advice, Tim: if you think it's tough at the top that's nothing compared with how tough it is in the middle. Suggest you invest some more money in R&D, rebuild confidence in your brand, design the next Next Big Thing and don't look back, because objects in the mirror may be closer than you think.

The Register - Apple: Good news, everyone - sales are less bad than we thought. Not amazing but not bad. $84bn is $84bn, tho 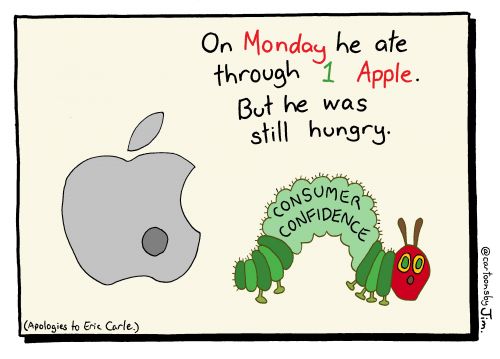 Your call may be monitored for monetary purposes

Once again we're forced to look at Facebook's business model and conclude that it's based on lying and cheating and once again we have yet more proof to back up the claim that the company which destroyed the advertising market is a loose cannon, rolling around the decks, causing chaos and mayhem wherever it goes.

Today's despicable-behaviour story is that Facebook decided it wasn't learning quite as much as it would look about customer behaviour and so went after the youth market, by paying teenagers to give up all their personal data via a VPN.

Putting aside for a moment whether users who are paid US$20 a month for their data were fully informed of the breadth and depth of the app's intrusion, Facebook has agreed to pull the app from the iOS and Android stores, but was beaten to the punch by a furious Apple which yanked Facebook's developer credentials and banned the app itself.

Facebook had slipped the app out under an Apple Enterprise Certificate programme designed to give companies the ability to publish apps aimed only at their own staff. That Facebook abused this function to launch a public-facing app really got up Tim Cook's nose so that was that.

But before we keelhaul Facebook for yet another breach, Google has a similar problem with a very similar looking app it too has released. Screenwise is a monitoring tool (albeit aimed at adults) which made use of the same Apple process and which has likewise been pulled from the e-shelves, with the added benefit of Google apologising for the breach of trust.

So marks to Google for tidying up the mess properly, and for trying to manage the whole process a little more openly than Facebook, but it really does beg the question, what on earth do these companies think they're doing?

It's one thing to analyse customer data, to seek feedback on products and services, and to try to better understand what a customer is doing, but it's something else entirely to monetise that customer, turn them into a product and sell them as a commodity without their express and informed consent.

Facebook, Google, Twitter and others have promised to tidy up their act, to clean out the "fake news" merchants and to deal with neo-Nazi sympathisers and various other nefarious activities, but have they done anything substantial? The jury is still out.

I gave up my Facebook account last year because it became clear that despite lots of intense interest in the company's activities, and parliamentary-level hearings all around the world, the company wasn't about to stop operating the way it does and wasn't able to be reined in any time soon. The only choice we have as users is whether or not we take part in the game, and I made the call to get out.

TechCrunch - Facebook pays teens to install VPN that spies on them

The Register - Europe taps Facebook, Google, Twitter on the shoulder. So about those promises to stamp out lies, bots, dodgy ads?

Seems to me that these two entertainingly presented anecdotes of mega-tech-corporate fallibility and calculated betrayal of public trust point to something more general... Perhaps mega-tech-multinationals are simply and implicitly unworthy of our trust? Perhaps their very model leads inevitably - when they get to this size (although the size threshold could be far lower, given that we only tend to hear about the "household name' brands when they're badly caught out).

Perhaps we shouldn't trust mega multinationals of any stripe with our data or privacy, or much of anything really. Are we still happy to extend them total trust as we routinely and pervasively do when we outsource control of our devices to them?

I kinda hope that evidence (mostly carefully minimised by various PR campaigns, etc.) that's accreted over the past couple decades would be getting people to start thinking... maybe the status quo isn't really such a good idea.

But maybe I should just bite my tongue, and conform like all the other good tech hostag... er, consumers...

Some good points David (and Paul B), especially about the trustworthiness or lack thereof, when dealing with multinational corporates.

It puts the Huawei brouhaha into perspective - while everyone was worrying about what the hostile invaders were planning, we opened the back-door to friendly-looking but equally rapacious western corporates with their own agendas. World domination comes in more than one form...