Here's the weekly update from TechBlog editor Paul Brislen on all things Tech:

Telecommunications - look back in anger

No sooner had I written yesterday's post rounding up several telco stories (in brief: 2Degrees is doing well, Vodafone's doing pretty well, lots of people are connecting to the UFB and UFB2 is well underway) than the Commerce Commission put out its annual review of the telco sector.

I suspect there might be something in the water.

The ComCom report makes for very good reading. New Zealand has a strong, vibrant retailer market, a competitive mobile market with three network operators (still very little MVNO activity but given the pricing we have I can live without too many Mobile Virtual Network Operators), a rapid uptake of UFB's fibre to the home (33% of those able to get it now have it - much greater uptake numbers than were predicted for this stage of the rollout and nyah nyah told you so) and the second phase of the Rural Broadband Initiative about to deploy.

Prices are down, speeds are up, unlimited broadband has become the default in fixed services and aside from lousy customer service stats (everyone hates waiting on hold to talk to their phone company. It's a universal complaint) the industry is facing the right way, going forward, ramping up.

(you knew there had to be a but)

But there are still some people who question the role of the regulator in delivering all of this.

Over at NBR one poster who calls himself Roderick Deane (and whether or not it's the actual former-Telecom chairman or not I don't know) has demanded to know how we would have got on without "heavy handed" regulatory intervention.

Clearly, "Mr Deane" feels that the regulator was unnecessary or at least that somehow we should have run a parallel process whereby an unregulated half of the country could be compared with the Communist leanings of the other half.

Well wonder no more, because I have a crystal ball which sadly is stuck in reverse and I shall gaze into it for you.

1991ish - Telecom is privatized and its new owners begin a campaign of stripping out every cent of profit they can legally get away with. Our complete lack of regulation in the sector means on competition law can be applied and as there is no competition, Telecom's foreign owners get away with murder for nearly a decade, taking out three times the cash they paid up front before finally tossing the company's husk of a corpse onto the market where it gasps like a landed fish.

1991 - Clear Communications launches but Telecom refuses to connect to it and so because of a lack of regulation, Clear soon goes out of business, and never invests in the fibre backbone that later become so attractive.

1998 - Vodafone doesn't buy Bell South's New Zealand assets because Bell South never set up in the country. When the spectrum auctions came about, Telecom bought all of the spectrum it could and shut out competition. Despite a couple of attempts to get the courts involved, and some threats from a minister with a beard, the pace of legal intervention remained glacial and it wasn't until a decade later that the court ruled, by which time nobody cared.

Telecom continues to offer CDMA-based services until the iPhone comes out in 2007, but uptake is extremely low because of a combination of high call pricing and limited TXT message capability.

2010 - Finally the ailing Telecom is handed back to the government for a dollar by its owners on the basis that investing in the landline network, new GSM mobile network and international submarine cable needed to bring New Zealand telecommunications up to speed would cost more than the company was worth. Think NZ Rail without all the lovely stories about engineers and train drivers. New Zealand has missed out on the mobile phone revolution, the internet revolution (don't forget, Telecom didn't bring the internet to New Zealand - it was a bunch of nerds at Waikato University. Telecom famously turned down the chance to set up a gateway for this newfangled "email" thing because "we have faxes, we can send electronic letters already") and because of our distance to market we're stuck with primary industries as our only source of revenue.

The dates of these things are all fairly accurate and the upshot of no intervention would have been limited investment on many fronts - simply having 2Degrees arrive in New Zealand has delivered value to New Zealanders whether you use 2Degrees or not.

Regulation and intervention delivered competition in the form of Vodafone, 2Degrees, multiple Retail Service Providers and multiple networks, both fixed and mobile. The alternative to regulation was a Muldoonist paradise where one provider failed to deliver on all fronts and I for one am glad we didn't go down that path.

Techblog- Telecommunications round up

Don't WannaCry for me

So we're through the bunfight of ransomware attack WannaCry and can sit back, happy that we survived the maelstrom mostly intact.

New Zealand escaped without too much damage and indeed because of a lucky pick by a security researcher, the main thrust of WannaCry was parried quite nicely.

Microsoft came out OK, having blogged about the anguish caused by having the US government spy agency, the NSA, sit on the flaw for yonks and keep the detail of it all to themselves, thus potentially landing the world in the pooh.

One wag (OK it was me) even suggested that the whole thing could have been orchestrated by Microsoft's PR team to encourage everyone to turn on automatic updates because the butcher's bill does appear to show limited damage and a raised awareness of the need for such things.

First, the number of machines worldwide running the positively ancient Windows XP was shockingly high. Hospitals across the United Kingdom were taken out because they still ran XP and because last year the UK's Home Secretary decided not to pay Microsoft the licence fee for a security patch that would keep the machines safe. Yes, that was Theresa May, who saved the country £5.5million, and is now figuring out how to get Britain out of Europe while retaining all the benefits of being in Europe. Good luck!

The second is the role of spy agencies as both public servant identifying security threats and protecting the public from them, and also spy agency, keen to keep secrets to themselves and exploiting potential security flaws for intelligence-gathering purposes.

This dual role is something that needs to be addressed, especially if the US NSA can insist on software companies installing backdoors into software and encrypted services so the NSA can take a look around, but which is unable to then secure those same backdoors and ensure nobody else uses them.

It's all well and good making all locks use the same master key but when you leave that master key on the bus, we're all at risk.

It's worth noting this was the first trial of the newly anointed CERT NZ government department - a department charged with keeping us secure in cyberspace yet which works out of the GCSB.

Apologies - I'm thinking of the CCIP which was an earlier take on the whole cyber-security beast. Hats off to Colin Jackson for spotting the error. Dammitall. 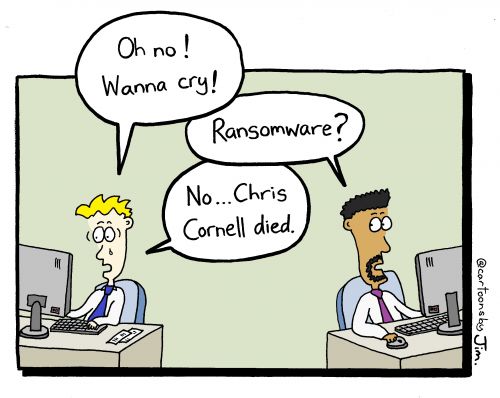 It's hard to believe that it's 23 years since the VSI Electronics Excellence Awards kicked off the annual tradition but it's true. The event soon morphed into the Hi-Tech Awards (once the Computerworld Excellence Awards faded away) and now it is the celebration of the Hi-Tech industry in New Zealand.

This year, as it did in 2016, the Awards came at the end of Techweek and I think many people were ready for a party by that stage. Plenty of conviviality was available as digital payments provider Pushpay cleaned up the big award and Frances Valintine took out the Flying Kiwi for her work in tech education and encouraging women into the sector.

It's great that we can celebrate such successes, and indeed ITP has its own ITx Conference and awards to consider, among others. There's always room for more cheerleading in an industry that is rapidly becoming a stalwart part of New Zealand's economic environment so here's to you all and very well done.