From Gravity to Ghostbusters: Film festival to showcase women in STEM

Auckland techies and cinephiles are in for a treat in July as a week-long film festival kicks off with a focus on strong female leads in science and innovation-themed movies.

The festival runs from July 1 to July 7 and is hosted by the Association for Women in the Sciences (AWIS) and takes place at the Capitol Cinema on Auckland's Dominion Road. Dame Juliet Gerrard, the Prime Minister's Chief Science Advisor, will open the festival.

The line-up will include biopics of inspiring women such as Hedy Lamarr, the Hollywood actress who invented the technology behind modern-day Bluetooth (Bombshell), Marie Curie, the first person, and only female, to receive two Nobel Prizes (Radioactive), and wildlife expert Dian Fossey (Gorillas in the Mist).

Science fiction will also feature, with female leads in Gravity, Contagion, Arrival and the 2016 remake of Ghostbusters.

The little-known story of Hedy Lamarr is likely to be a highlight of the festival: As Capitol Cinema explains:

"Hedy Lamarr, the screen siren who was called "the most beautiful woman in the world" and starred alongside Hollywood giants like Spencer Tracy, Jimmy Stewart and Clark Gable, invented a wireless form of communication called 'frequency hopping' that revolutionized mobile communications all over the world, a feat that would directly lead to the creation of secure communications for wireless phones, Bluetooth, GPS and WiFi technology itself." 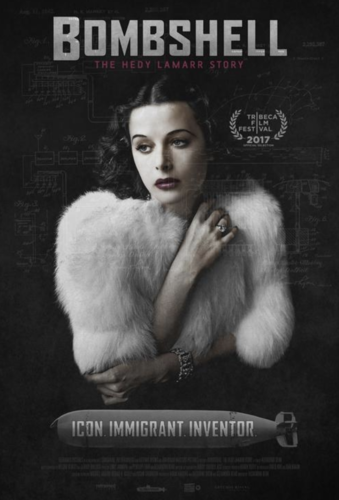 "About 40% of students in New Zealand engaged in STEM (science, technology, engineering, mathematics) undergraduate studies are female, and for subjects like engineering and information technology this drops to around 20%," says AWIS National Co-Convenor Kieren Arthur.

"The AUT Women in STEM film festival allows us to celebrate the role of women in STEM, and hopefully inspire the next generation of female scientists, engineers and innovators."

Profits from the Film Festival will be used to fund the AWIS Women in STEM Award, a scholarship administered by the New Horizons for Women Trust aimed at supporting women studying a STEM qualification at tertiary level whose social identity is under-represented in their field of study.

If you want to expand your women in STEM festival options with some home viewing, here are five other great movies featuring strong female characters in leading roles.

Contact (1997): The touching first-contact movie from the mind of the late, great Carl Sagan features stars Jodie Foster as Dr. Eleanor "Ellie" Arroway, a SETI scientist who finds evidence of extraterrestrial life and is chosen to make first contact. I watched it again recently and despite some spotty CGI towards the end, it holds up incredibly well.

Alien (1979): Sigourney Weaver's signature role as Ripley, who has to take control to try and save her crew mates when an alien gets onboard the Nostromo spaceship and starts killing people. A classic of sci-fi horror which would spawn many sequels.

Ex Machina (2014): Alicia Vikander steals the show in this icy tale about Ava, the android who is fawned over by her male creators but who proves to be more than a match for them.

Hidden Figures (2016): The story of a team of female African-American mathematicians who served a vital role in NASA during the early years of the U.S. space program. One of my favourite movies of recent years, a great ensemble cast and an important story.

Annihilation: A surprise gem buried in the Netflix library that looks dazzling and stars an on-form Natalie Portman as Lena, a biologist signs up for a dangerous, secret expedition into a mysterious zone where the laws of nature don't apply. Written and directed by Alex Garland, who was also behind Ex Machina.

To book tickets for the AUT Women in STEM Film Festival, visit the Capitol Cinema.