Griffin on Tech: The EU's plan to bring Big Tech into line

New Zealand's tech start-up community has done very nicely over the last decade or so developing software and applications that solve problems encountered all over the world.

Xero embodied Rod Drury's vision for a user-friendly accounting package. For Raygun's founders, it was a desire to streamline the process of detecting and solving performance issues in software applications.

Our tech community has excelled particularly in business to business software. That doesn't necessarily make our companies household names when they go big overseas. You are unlikely to see a new web browser, search engine, social network or video streaming platform emerge out of New Zealand to go global.

In fact, that's true of most countries, because the barriers to entry to developing new platforms of those kinds and breaking through in the global market are now incredibly high. Occasionally a new player emerges, such as TikTok in social media or Tidal in music streaming. But by and large, the tech giants Meta, Google, Amazon, Apple and Microsoft have been able to exploit a hands-off regulatory environment to maintain their market dominance. Europe last week called time on that situation with the final text of the Digital Markets Act, which was agreed between the European Commission and the European Parliament. It is the most significant internet-related regulation introduced in the last years and it will have implications all over the globe.

The DMA allows the European Commission to designate the largest tech platform providers, those with a market capitalization of over 75 billion euros and with 45 million active monthly users or more, as "gatekeepers".

Rather than pursuing these companies through the courts for anti-competitive activity punishable with large fines, the EU is turning the process on its head. It will issue the Big Tech companies active in EU nations with a series of 'do's and don'ts' which will dictate their conduct moving forward.

The key ones include: 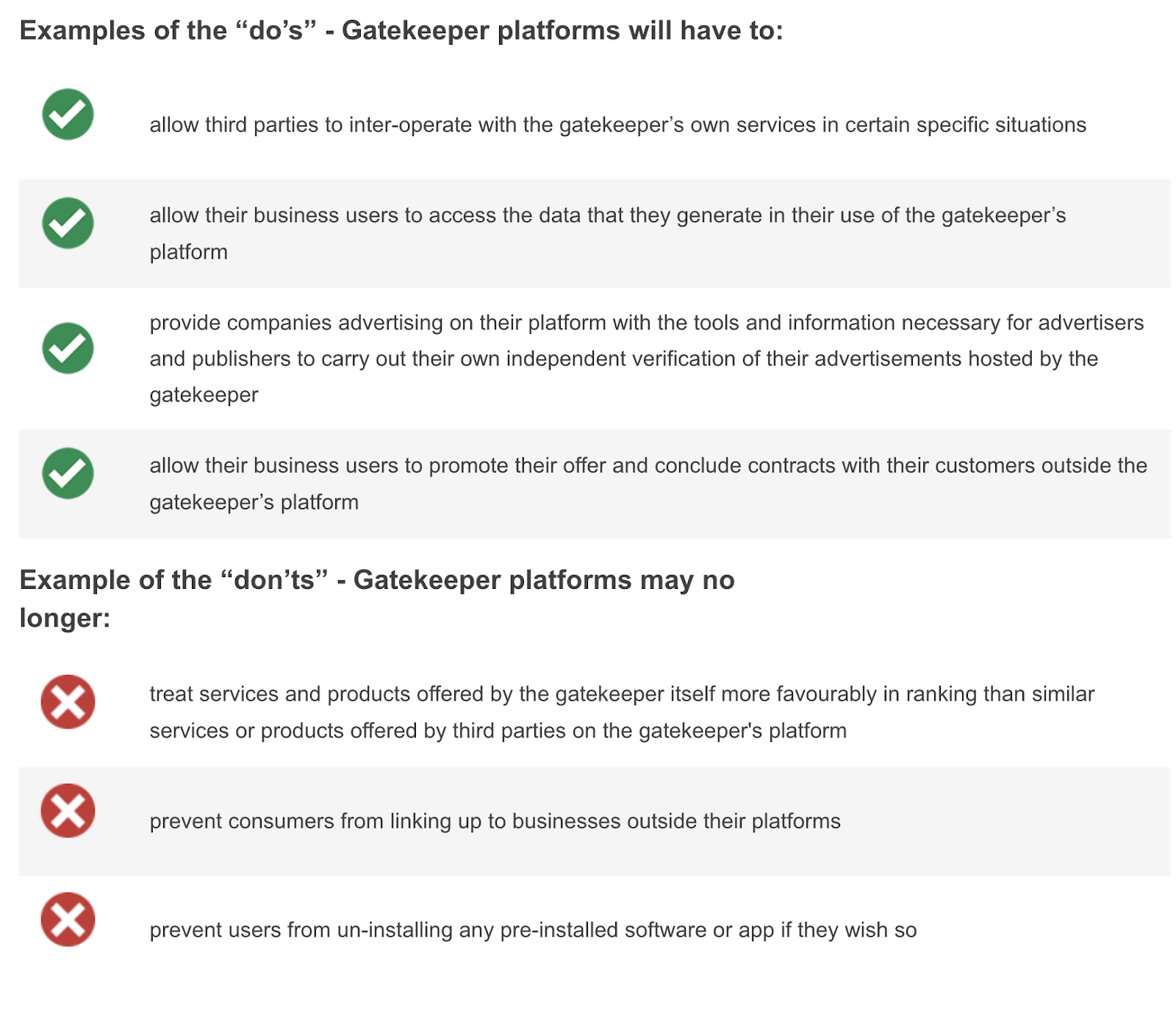 Another one that was added late in the piece, was the requirement for interoperability between messaging apps, so that new players can emerge to compete with Messenger, WhatsApp, Signal, Telegram and others.

It means that messages sent from Messenger would be able to be received in Signal. That has led to a lot of consternation in the Big Tech companies about the technical and security implications. Will it break encryption? How do you design for interoperability when these platforms have largely been created as walled gardens?

That's the mammoth task the tech giants now face if they want to continue doing business in EU countries. The above do's and don'ts will open up choice and competition for consumers, which has long been needed as the evolution of Web 2.0 has served only to cement the power of the big platform providers.

But it could also open up a new wave of innovation. If you now have the ability to interact with the Facebook ecosystem in a meaningful way and glean insights from the data your applications generate on that platform, you can start to develop with the platform in mind.

Microsoft, Meta, Google and others point out that they have long supported third-party apps for Google Drive, Teams and other applications. But in reality, these platforms jealously guard the most important access to their users and are miserly in sharing insights about what happens on their platforms.

Under the DMA, both consumers and businesses will have more control, insights and freedom to move on these big platforms. That could see a wave of cool new apps and online services emerge in the coming years and lead to a more diverse ecosystem.

It is notable that these changes are being driven in the EU, which has few major tech companies of its own, rather than the US, the home of most of the Big Tech companies. While US politicians also recognise the need for more regulation in the digital space, their efforts are glacial in comparison to that of the European Parliament.

Big Tech has generated considerable wealth for the US, generating high-paying jobs and cementing the dominance of US technology all over the world. The last thing President Biden wants is to kill the goose that laid the golden egg.

But something had to change and the new requirements that will be introduced later in the year with the DMA will likely be implemented everywhere Big Tech operates. With non-compliance punishable by fines amounting to 10% of a company's global turnover, Big Tech can't afford to slip up by maintaining one system for the EU and another for the lower compliance requirements of the rest of the world.

We are a year or two away from seeing in real terms what the impacts of the DMA will be. But already, it's already built momentum towards a more innovative and interoperable web ecosystem. That means there'll be more opportunities for our own tech entrepreneurs and innovators to think big and explore ventures that were previously out of reach.