Griffin on Tech: Time's person of the year contains multitudes 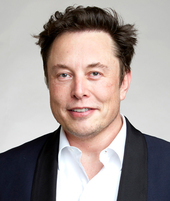 Time magazine's decision to put Elon Musk on its cover as its person of the year was a polarising move, to say the least.

The entrepreneur, innovator, largely self-trained engineer and on the strength of Telsa's surging share price, the richest person in the world, seems to have equal numbers of detractors as fans.

I find myself jumping the fence from one camp to another on a frequent basis. He can be infuriatingly immature and vindictive - remember the bizarre Twitter campaign he waged against the diver who helped rescue the kids from that cave in Thailand?

He is a libertarian who cut his teeth as part of the Paypal mafia, believes wholeheartedly in the permissionless innovation that has given us all that is good and bad about Big Tech. He doesn't much like the government.

"The government is simply the biggest corporation, with a monopoly on violence," he told the CEO Council Summit in the US last week.

"Why would you want to give a corporation with no competition, that can't even go bankrupt, more money?"

Musk is known all the way back to his Paypal days of having a huge appetite for risk and a healthy disdain for regulations and laws, which has cost his companies dearly over the years. But in that same interview, he spent 10 minutes talking about his current slate of projects, which are as diverse as the Tesla Cybertruck, the Neuralink implantable brain-machine interface and his most challenging project - Starship, a massive rocket that's twice the size of the Saturn V rocket and which he sees as essential to the effort to colonize Mars.

He not only wants to build the biggest rocket in the world, but to make it completely reusable.

"This absorbs more of my mental energy than probably any other single thing. It is the difference between humanity being a single planet species and a multi-planet species. It is really that big of a deal," says Musk.

Most other entrepreneurs would be doing well to make just one of those projects a success. The scope of Musk's ambition, backed up by an almost superhuman ability to actually get things done is incredible. As Time's writers put it:

"Many people are described as larger than life, but few deserve it. How many of us truly exceed our life span? How many will make it into the digital textbooks our spacefaring descendants will study?

"As Shakespeare observed in Julius Caesar, it's far easier to be remembered for doing evil than doing good. How many will leave a mark on the world-much less the universe-for their contributions rather than their crimes?"

Musk is definitely one for the history books, his position already secure alongside Edison, Bell, Jobs and yes, Nikola Tesla. There is merit in Musk's argument that to really achieve great things for humanity, the government needs to get out of the way and let innovators do their thing. But not everyone is as comfortable with the rapid pace of technological change and the profound impacts it is having on the world. The next few years are likely to be characterised by an effort to regulate technological development to a greater degree. musk wants a Neuralink in everyone's brain. He sees that as progress. But it will face resistance as he has never experienced with his rockets and electric cars.

Musk wants to colonise Mars and the solar system. But others would prefer he slowed down and joined Bill Gates and others in ploughing their billions into solving the climate crisis. Even on that front, Musk would rightly argue, he has made a big contribution, building the electric vehicle market through the success of Tesla. He kickstarted that revolution, which will ultimately lead to major reductions in greenhouse gas emissions from transport.

It's been a grim year for many, one in which the coronavirus stalked us, confined us to our homes and drove many people out of business. The economic outlook for the global economy is uncertain. Will all of that money printing come back to bite us in the years ahead? Climate change is going to wreak havoc in the coming decades. No one really believes the commitments made at the climate summit in Glasgow will be enough to stop dangerous warming.

We have major problems to fix, which is why we really do need people like Musk, innovators who can mobilise resources and people to get things done quickly.

"Now this shy South African with Asperger's syndrome, who escaped a brutal childhood and overcame personal tragedy, bends governments and industry to the force of his ambition," notes Time.

I look forward to seeing what else Musk achieves in the next 20 years. I think he will colonise Mars and begin the process of making us a multi-planet species.

Love him or loathe him, there's something incredibly intriguing about what makes this complicated character tick. I'm not sure Musk knows himself.

As Bob Dylan put it:

I sing the songs of experience like William Blake

I have no apologies to make

Everything's flowing all at the same time

I live on the boulevard of crime

I drive fast cars, and I eat fast foods