Google gears up for the election

Google will roll out a transparency tool to reveal sources of political advertising, offer security training to groups involved with the political process and work with the Electoral Commission to get official information out as it readies for September's General Election.

The moves come as Google also prepares for what is likely to be a particularly bitter and hard-fought presidential election campaign in its home country, as President Trump seeks re-election against a backdrop of race riots and the fallout of Covid-19.

The big technology platforms, Facebook Google and Twitter, take differing approaches to dealing with political advertising, with Facebook controversially choosing not to censor or remove adverts that blatantly peddle misinformation.

Twitter, on the other hand, doesn't run political ads, other than those to encourage participation in the political process itself. Google, with its vast search and display ad business and the ad-supported Youtube platform, allows political adverts, but limits the ability to target them to criteria including, age, gender and postal code, rather than a voters' perceived political affiliations.

In a blog post, Ross Young, Google New Zealand's government relations and public policy manager, wrote that Google would introduce a "searchable ads library to provide more information about who is purchasing election ads, whom they're targeted to, and how much money is being spent".

"Our goal is to make this information as accessible and useful as possible to citizens, practitioners, and researchers," he added.

The Political Ads Transparency Report, which is already published for the UK, European Union, India and the United States, lists top-level information about the level of political ad spend in a country. Researchers can also drill down to see the advert itself, who authorised and paid for it, how much was paid, how long the advert ran for and how many impressions in received.

Young said Google would also introduce a "new process to verify election advertisers to make sure they are who they say they are".

It would work with the Electoral Commission to make official election-related information available and in a move to stop cyber attacks aimed at manipulating the political process would offer "in-person security training" to campaigns, elections officials, journalists and human rights organisations to help them avoid phishing attacks.

Facebook, which is a popular platform for political parties and their candidates to push their policies, has transparency tools in place to reveal who places political adverts. But it has resisted calls for it to limit the targeting that's possible for those placing adverts of a political nature. 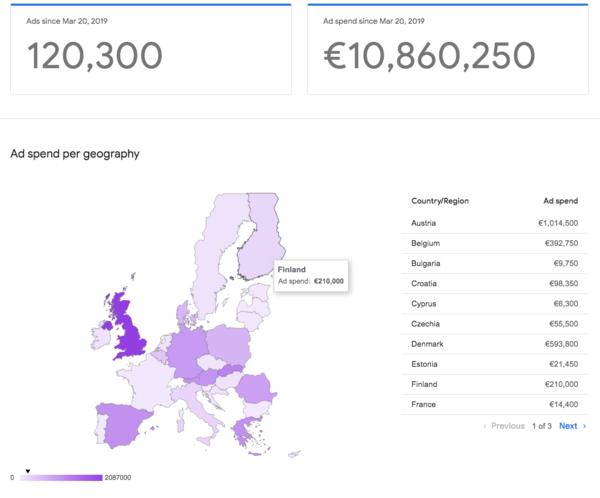 "Unlike Google, we have chosen not to limit targeting of these ads," Facebook said in an update to its political advertising policy in January.

"We considered doing so, but through extensive outreach and consultations, we heard about the importance of these tools for reaching key audiences from a wide range of NGOs, non-profits, political groups and campaigns, including both Republican and Democratic committees in the US.

"And when it comes to targeting our data actually indicates over 85% of spend by US presidential candidates on Facebook is for ad campaigns targeted to audiences estimated to be greater than 250,000," Facebook added.

Instead, Facebook said it would make it easier for users to see "fewer" political and social issue adverts.

Facebook already has a transparency tool in place that allows users to search for New Zealand-based political adverts and displays the same type of information on each advert as Google does.

The New Zealand Herald reported this week that Google New Zealand's accounts showed revenue had nearly doubled to $36 million in 2019 over the previous year as Google moves to report more of its local revenue with the New Zealand division, rather than in other countries. But the revenue still doesn't reflect the level of advertising Google books in New Zealand.

Instead, payments from Google to its parent company jumped from $85m to $511m. Despite controlling a share of the online advertising market in New Zealand worth upwards of $600 million per year, Google NZ reported a profit of just $8.1m n 2019 up from a $1m loss it in 2018.