I've just pitched a new and radical idea to a client. They want to send out a newsletter to all staff about various issues of the day - a monthly round-up of company-wide information that may be of interest. They want to set up a section on the intranet to do it.

Here's my idea: what about an actual paper-based newsletter that is sent out to all staff on a monthly basis?

I know, I know… I was shot down by the client too. Too crazy. We're a digital company we can't be mucking about with paper based stuff.

Well, sorry to have to tell you all this but digital stuff doesn't always get cut through and in a world where some people have thousands of unread emails (you know who you are. I don't know how you live with yourselves but there you go) perhaps finding another medium is the way to go.

I've seen other elderly tech commentators mention they struggle to remember which of the myriad of communication channels a conversation took place in. Was it WhatsApp, SnapChat, Slack or Messenger? Was it an email, a chat, a DM or a conversation (hardly - that last one never ever happens any more).

With so many channels and so much digital content perhaps a paper-based approach makes sense if only for the novelty factor.

That's what we found with our school community survey a few years ago. The paper version had really high uptake rates with most families responding. The online version saw return rates plummet and so we went back to paper.

Which of course brings us to the Census and Stats NZ's steep learning curve.

The CEO has resigned, and that's appropriate. The agency didn't do what was required of it and for a number of reasons (including an earthquake or two) the move to a digital census did not deliver the results needed.

But I think perhaps it's the model itself that's flawed. The Census is a big deal. In my house I've drummed into the kids that filling in the Census is up there with voting and serving on a jury as key components of civil society and it deserves to be more than an online click fest.

Yes, I know it's more efficient to deliver content digitally. But sometimes it's not about the delivery, it's about the content itself.

StatsNZ - Report of the Independent Review of New Zealand's 2018 Census

The Spin Off - The census cock-up is no outlier. Stats NZ has become a lumbering brontosaurus

I rode a scooter to work every day for about three years. In that time I was run over twice and had to give it up and go back to my car.

In that time I developed two things. First, a set of cat-like reflexes which sadly have deteriorate in the years since much as my actual cat has become little more than a puddle of fur and fangs that stirs itself occasionally to eat and complain.

And secondly, a heightened awareness of the vehicles around me on the road - something that remains to this day and is incredibly useful.

Useful because when you're on two wheels the give way laws are based entirely on mass. Bigger than me? I'll give way to you. Smaller than me? You'll wait your turn.

That apparently is the law of the jungle as it applies to Auckland's roads. It overrules the Road Code, common sense, common decency and the laws of physics. I've seen cars weave between lanes, crash through red lights (very red lights. Lights so red they're embarrassed by how red they are), turn without indicating, turn while indicating the other way, and on one notable occasion just pull over and stop directly in front of causing me to do my patented impression of one of those stick on Garfield toys that were so popular back in the day.

So when news came that Auckland Transport was going to do the right thing and put in lots more cameras on our roads, I was pleased and supportive and keen for them to get started.

But there is, of course, a downside to such activity.

Auckland Transport is looking to spend several million dollars on upgrading its fleet of cameras and modernising its systems to better cope with thousands of streams of content. We're expecting to see up to 8,000 cameras as part of a consolidation of overlapping CCTV programmes. Currently there are cameras run by AT, Auckland Council, NZ Police and also regional councils and yet more that are owned by commercial operators.

As the new city rail system is configured there will be a need for more cameras in more places. We're miles away from London levels of CCTV. I'm not a huge fan of cameras replacing police on the street, but I am a fan of cameras helping the flow of traffic. I'd like smart traffic lights too (and the tram but that's another story) and I'm more than happy when I pass through toll gates that don't require me to stop and fish out coins to pay my way.

But all of that presumes the agency abides by the Privacy Act and unfortunately it turns out that Auckland Transport hasn't actually got in touch with the Privacy Commissioner about any of this and hasn't squared it all away.

And of course the transport agency is keen to share information and video content with other agencies, including the police and Civil Defence , and again all of this is fine if the rules are followed.

Before we start down the path of AI, facial recognition tracking, sharing data between agencies and generally being able to track the movements of people, cars, cellphones and all the rest in a combined and real-time updated database accessible to anyone in a position of authority, how about we get the rules straight first, OK? 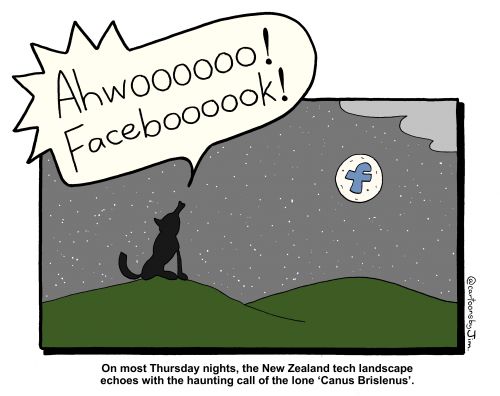 I haven't had to fend them off for a while but the radiation nutters have followed me to LinkedIn and I've had to block a few there.

Every time I write about 5G (and 4G and 3G and wifi and pretty much anything) I get some replies that would suggest a certain unhinged nature in my correspondent. Generally I try to engage at least a little (unless they're abusive - they just get blocked and reported) but it always comes back to the same point: "I have watched a video on YouTube and it says cellphones will give me cancer".

YouTube and Facebook have become the default for many people seeking entertainment. That's what they were set up for and that's their starting point for all things social. Now, however, they've morphed slowly but surely into more than just that. YouTube is a fantastic resource for educational videos - anything from maths to deboning a leg of lamb to what is understeer in a car and as such it's an invaluable resource.

Likewise, Facebook is a fantastic resource for sharing information with a group, keeping disparate family members informed and connected and generally providing a hub for all your group chat needs.

Unfortunately the elements that make these networks great as social platforms make them incredibly dangerous as news sources. The importance of a news story is not based on how many people read it or watch it but on the content itself. Yet the algorithms these companies use promote the stories that have the most viewers as if that's a metric that matters to the readers or viewers. It does not. It does matter to the advertisers and of course we have to remember that they're the actual customer of these networks - they're the ones that pay the money and they're the ones that get the love from a corporate point of view.

But more and more people are getting their "news" from these sources and unfortunately that means the videos that get the most likes or clicks or views are the ones that get promoted by the algorithms that run these sites.

And that generally means more and more extreme video content. Radical content dressed up as news driving fear, uncertainty and doubt and in many cases extremist reactions.

It's not just 5G, as my friend Michelle Dickinson points out. As Nanogirl she is a science communicator has a large social media following of people who want to know more about the world around them. But she also has plenty of followers who want to tell her she's wrong. Despite the education, training and experience she's got, they've watched a video on YouTube or read something on Facebook and they can't be dissuaded from their views with "facts" or "reason" or "logic".

I used to think the moon landing hoaxers were funny but now I see they were just the canaries in the coal mine. Now that millions of people get their news from a source that values clicks over quality control, that in fact actively refuses to play any part in quality control, news can be whatever you want it to be.

NY Times - This Video May Not Be Real

NZ Herald - UK crackdown: Facebook could be fined 5% of revenue for toxic videos