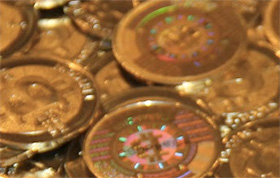 News came this week that those who invested in Bitcoin are at risk of saying goodbye to their money after the collapse of the Mt Gox exchange. A year ago Mt Gox accounted for 70 percent of the most popular cryptocurrency's global transactions. By Wednesday it was closed.

A total of 744,400 Bitcoins went missing. Officially this was the result of a "malleability-related theft" and it's quite possible the theft had been going on since the Mt Gox exchange first opened.

Even if they aren't his words, they make a good point. Quantum mechanics isn't for the faint of heart.

If anything Bitcoin is even harder to understand. For many, hardest of all is understanding why people would place trust in a currency created by someone who won't reveal their real name or face and mainly favoured by drug dealers, tax dodgers and, it turns out, a more technically talented brand of crook.

Online thieves stole Bitcoins by making it look as if transactions didn't occur. They exploited a software bug that Bitcoin developers had known about since 2011. For a brief amount of time it was possible to change the unique identifier given to each transaction.

The bug was bad enough, but it turns out Mt Gox's software made the loophole easier to exploit. The online crooks managed to steal about six percent of all Bitcoins in circulation - that's about half a billion New Zealand dollars at today's rates. It would have been worth even more if Bitcoins had maintained their value.

Either way, it looks like this has been the biggest online theft in history.

Many Bitcoin fans are still in a state of denial over the attack. It turns out other Bitcoin exchanges have been the target of massive distributed denial-of-service (DDoS) attacks aiming to exploit the same bug.

There's no question most, if not all, of the Bitcoin trading system has been compromised. Earlier this week what is left of the currency was trading at about half its peak value - prices are fluctuating madly. Many Bitcoin owners who haven't lost their money can't access their accounts.

Ironically, those involved with Bitcoin who were so eager to bypass traditional financial systems are now screaming for financial regulators to help. Sadly, that's not going to happen.

Wall Street Journal: Pay Me in Bitcoin, IT Professionals Say

The Economist: Cryptocurrencies: The great hiccup

Businessweek: Where Did the Bitcoins Go? The Mt. Gox Shutdown, Explained

Bill Bennett is Editor of TechBlog.

Yes, it sure is a mess... but as for 'placing trust in currency', that has always been a blind act of faith, with currencies regularly losing a lot more than this 6% of bitcoins.

My parents took out a life insurance policy when I was 2 years old, to be cashed in on my 44th birthday... by which time they figured I would either have made my own way or not.

- If the dice had fallen badly for me I could buy myself a house and be set up for old age.

- if things had gone well, I could blow the lot on a luxury would tour with my family.

Premiums in valuable money were paid ('invested' was the description), until I cashed it in aged 30 realising that the inflated away One Thousand pounds ($2000) was not going to make a lot of difference either way.

Currencies are a Ponzi scheme, the 'official' no less than any other.

The real reason not to buy into crypto money is that politicians will never let go the currency teat by letting a currency out of their grasp.

Bitcoin is not hard to understand at all. It is extremely sad to see that this journalist immediately references "tax-dodgers". He's the typical type of New Zealander who can't understand the stock-market and uses bullying tactics in his argument.

Bitcoin is a fantastic experiment, and like anything in finance it has a few teething problems. Maybe your journo could read "the Ascent of money" and he'll find many examples of how initially finance systems fail till they settle.

This may be a big on-line breach, the money lost pales in comparison to the Heist performed by the banks in 2008. That heist is precisely why so many are in search of a non-reserve bank controlled currency. Take 2 bitcoin will be better.

Having said all that, it is also interesting to note that so short after its release, speculative trading in bitcoins started. It's like what happened in the 1600 with the VoC shares, within 20 years of the emergence of the first Ltd, derivatives etc. were all there, including booms and busts. It is probably the human condition to immediately exploit :)

Last but not least it is surprising to read such a biased poor article on our IITP news channel. Sugest you read Bloombergs or Forbes, as this article is already out of date.

I've just removed your second comment as it's getting too close to ad hominem.

By all means argue the issues (the purpose of TechBlog is to put forward different perspectives and viewpoints, and debate between them is good) but please keep it to the issues. ie please play the ball, not the man.