Most Kiwi kids want to be a sportsperson; then a vet, police officer, teacher

The results are fascinating. Primary and intermediate school children all around New Zealand were asked to draw pictures of what they want to be when they grow up. The 7200 Kiwi kids responded, identifying their career aspirations.

By far the most popular career was being a (professional) sportsperson. Next were being a vet, a police officer or a teacher / lecturer. 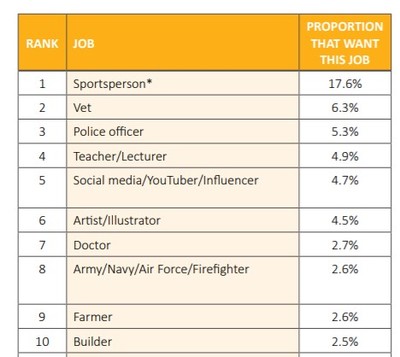 The Tertiary Education Commission has published its recent Drawing the Future research report.

In a world bubbling with all things digital, it was amazing to see information technology ranked 45th on the list and game developers 40th, behind a fast-food worker (26th), a retail sales assistant (38th) and an SPCA worker (42nd).

The key message is that the tech sector has a big job to improve its profile if we want to provide high value future careers for Kiwis. This will take a collective effort from the sector and the agencies. NZTech is doing a fantastic job working with the education sector and government to grow interest in tech careers.

Last week they ran, with the support of the education ministry,  the ShadowTech Teachers event , a game-changing programme for teachers, who are key influencers of students.

It was an opportunity to showcase the tech world and for teachers to return to the classroom and lay a path for students to get into tech after they leave school.

The annual Techweek event, organised by NZTech, will be held from May 24 to 30. Techweek is a nationwide series of events involving hundreds of New Zealand schools.

Cross-posted from NZTech with kind permission.