Brislen on Tech: Year of the Goat

I like goats. Well, in theory I like goats. They cavort and gambol and generally seem to be having a hoot of a good time and they really don't take orders. Saint Terry of the Pratchett once said that sheep are stupid, and have to be driven, but goats are intelligent, and need to be led. He was quite right (indeed, he often was) because the free-spirited behaviour we all love and adore in goats (we do, right?) has a flipside and that's belligerence, stubbornness and an ability to butt heads with anyone on any subject at any time.

This year has been the year of goat herding and we're not quite done yet. A quick perusal of the Before Times reveals a certain naivety that is quite touching to behold. 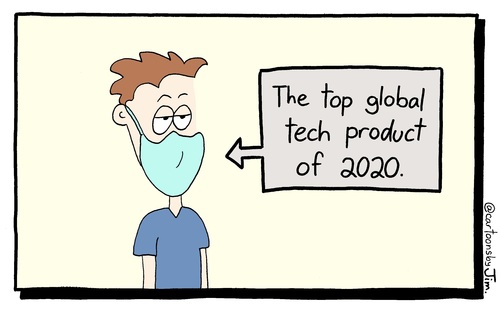 You bright and gorgeous beast of a month, with sunlight streaming onto us uninhibited by ozone of any kind. How bright and shining you looked, and how young and eager we all were (sort of) for the year ahead. Our biggest concern in January - Jeff Bezos being hacked by the Saudis, the need to figure out patch protection for Microsoft and gosh, aren't we doing well in terms of investing in our own home grown tech companies.

Little did we know what awaited us.

Short month, not much to say except we all have that nagging feeling we should be on holiday still and sadly we're not.

And that was it for the year. Really. The first sign of a story about COVID-19 (with 2000 dead and 75,000 affected worldwide) showed no inkling of the scale of what 2020 was going to bring for us. Some mutterings from yours truly about supply lines being affected, the just-in-time model, impact on universities without students coming to our shores and a pithy line about the official response: "The authorities have all responded far more eagerly to this outbreak than you'd expect from years of zombie movies, and I'm really pleased about that. But we might need to address a few of the ramifications that have reared their ugly heads before something larger and nastier hits."

It's OK, February Paul. There's plenty of time for ugliness to come.

Lockdown arrived with a hiss and a roar and lots of meetings. If there's a word of the year it'll have to be Zoom because the "little video conferencing app that could" became the video conferencing mega story of the year. Sure, there wasn't as much security as claimed and sure, there are plenty of other well-established options out there, but for some reason Zoom caught the public attention and while lockdown taught us to sneeze into our elbows, wash our hands for 30 seconds and how to squash the curve, Zoom gave us the new meeting etiquette, the "you're on mute" sign and some seriously new insights into our colleagues' home lives. From pets to Kylie Minogue posters, from rampant children to towel-clad husbands (all true stories), never before had we been so close yet so far away from our fellow workers.

We also learned all about contact tracing, about how it's done overseas, about what we need to do in New Zealand and QR codes versus Bluetooth versus The COVID card versus just writing it all down on a scrappy bit of paper.

And we learned about online shopping. Boy, did we ever - everything from food to digital content, from fruit and meat packs, to logging on at 0900 exactly to get the next supermarket pick-up slot. Those that were quick to adapt (like the grocery company that stopped sending fruit to empty corporate offices and instead set up a home delivery service) prospered and those that didn't… well, didn't.

Cloud services took off for corporates all around the world and if you didn't have a digital transformation programme of work underway in February, you did by June. Staff were not coming into the office any time soon so everyone needed access in ways we never had before.

Contact centre staff were probably the winners from all this. After wanting to work from home for years but constantly being rebuffed (it's an expensive, time consuming, distracting project to get everyone set up to work remotely) in the matter of days or maybe weeks every one of them was sitting in bed taking calls in their PJs with their headsets on and quite happy thank you.

There were other stories, of course. The US president remained a source of much entertainment and stress and of course fake news (some of it about us). There were a couple of elections. The social media giants continued to treat the concepts of defamation, privacy, objectionable material and the destruction of democracy itself as a PR exercise. We got to point and laugh at the Aussies as they tried to work from home using the digital equivalent of a plate load of damp spaghetti instead of fibre optic cable, and the anti-5G brigade finally got something to complain about as telcos began to roll out 5G kit in their networks, thus ensuring that sellers of conspiracy theories (and aluminium foil) remained flush all year long.

What will 2021 bring? Predictions are a mug's game but I'm pretty sure it won't be half as exciting and simultaneously as boring as 2020. Beyond that, who can tell.

Stay safe out there and we'll see each (one way or another) in The Future.