Apple ditches Intel for its own silicon

Apple hopes to bring to its iconic Mac computer line-up the performance improvements it has achieved with the iPhone and iPad in a move away from Intel to its own Apple Silicon chips.

The move was announced today at Apple's Worldwide Developers Conference, which is being held as a virtual event for the first time due to Covid-19 lockdowns and travel restrictions. As such, it was a subdued affair with few major announcements and mainly incremental tweaks to its operating systems for the Mac, iPhone, iPad and Apple Watch.

No hardware product announcements were made, but the move to Apple Silicon, which is based on chip designs from Intel's rival ARM Ltd., is a major one that will be phased in from the end of the year with a complete transition "within about two years", according to Apple.

Apple has proven already that by producing its own chips it can achieve faster performance, longer battery life and innovations such as the AI neural engine, better graphics processing and security-on-a-chip features. 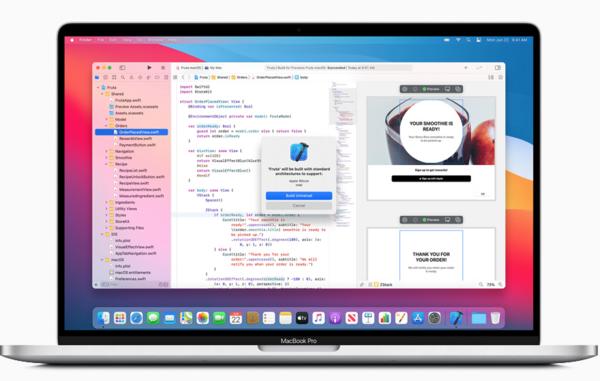 Apple's own silicon efforts to date have been driven by the needs of its mobile devices, which is ARM's area of speciality. Extending its Apple Silicon efforts to Mac computers will mean that every Apple device will be based on the same chip architecture which will offer advantages in developing and running software across those devices.

The transition to Apple Silicon will happen alongside the arrival of 'Big Sur' the new macOS operating system, which has been re-engineered to take advantage of Apple's new chip architecture.

Native apps running in macOS Big Sur will use a new version of XCode designed for Apple Silicon and Universal 2 application binaries that run on both Apple Silicon and Intel chips. Emulation software will allow apps from older macOS versions to be run and apps for the iPad will more easily run on the Mac.

The key now is easing the Apple developer community through the silicon transition. Apple today launched the Developer Transition Kit with that in mind. Developers can sign up at the Apple Developer Portal.

From PowerPC to Intel

For Apple, this is the biggest hardware shift since it dropped the PowerPC chip architecture in 2006 after using it for 22 years to power the likes of the iMac and PowerBook. Apple then migrated to Intel's x86 architecture.

But custom silicon seems to be the name of the game these days, particularly for mobile devices, with Huawei, Samsung and Microsoft all developing their own silicon capability as they seek to more tightly pair hardware performance with software and applications.