It's the data, stupid

Microsoft's announcement that it will build a "data centre region" in New Zealand has been met with quite a bit of excitement and a lot of questions.

First of all, what *is* a data centre region? It's a small cluster of data centres that are close enough to provide good connectivity but far enough apart to provide redundancy in case anything untoward happens (volcanoes, earthquakes, plagues of toads etc).

Then of course, there's what will it do that we don't already get? Well, technically not a lot - you'll just get it faster (or at least, with less latency and less opportunity for disruption.

And you do get the New Zealand jurisdiction for your data, although that also is up in the air. Some data is deemed too sensitive to allow offshore (think taxation/banking data and the like) and must be managed in the New Zealand environment. Law changes in the Australian and US jurisdictions put us at odds with their local requirements regarding who can access your data when it's stored over there and the belief is that US law wouldn't extend to data housed in New Zealand by a US company.

That's somewhat up in the air at this point as nobody seems really sure whether the US Patriot Act would take precedence over the New Zealand Privacy Act or just what would happen in event of a dispute.

But what it does mean is we get a (presumably) $100 million or so investment in local IT infrastructure, a boost in terms of international awareness of the New Zealand end of the market, more opportunity for local IT developers and grads to get involved with one of the world's largest tech companies and all that implies.

It'll be at least a year and possibly closer to two before the region is operational, and at this stage there's no sign of what exactly it will look like, what will be hosted locally and what won't, whether the region will be a true independent node or whether it'll be treated as a branch line connecting in to Microsoft's Sydney operation or something similar.

We've long talked about the era when New Zealand could be a net exporter of data, a place where data could reside and be made available to the rest of the world. As far back as 2012 I was writing for TUANZ about just such a possibility and the opportunity it would bring. It's been a long time coming but finally one of the big players is here - now to see what that means for the others (Google and Amazon in particular) and for local providers.

Techblog - Microsoft's local cloud play - what it means for NZ

RNZ - What will Microsoft's NZ move mean for local business? 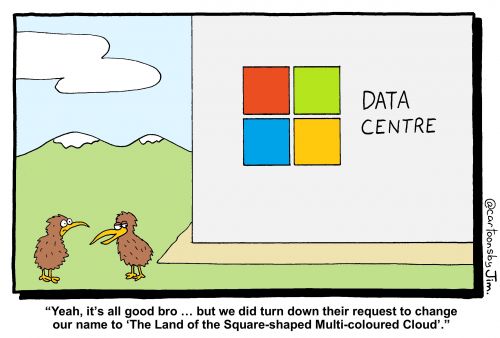 The Ministry of Health has once again assessed radiation levels (well, electromagnetic frequency (EMF) levels) at various sites around New Zealand, this time including a number of 5G cellsites for the first time.

The good news is that there are a number of 5G sites to review. The better news is that they're all operating well within maximum limits. The best news of all - these sites are passive sites and don't make use of the new 5G beam forming technology so we can expect to see EMF levels go down from here on out.

Of course, the levels measured aren't simply a reflection of the one tower in front of the researcher. There are multiple towers and typically you'll see EMF being produced by 2G, 3G and 4G towers as well, not to mention other sources from further away (although this is typically a very small amount by the time it gets more than a few metres from the source).

Almost all the towers operate at a maximum of 1% of the allowable limit. Where they're really busy they gust up to 2% possibly as high as 3%. Adding in 5G saw one site reach 5% of the maximum limit when all the networks were operating.

This is great news for those who are concerned because the limits are incredibly low at the maximum allowable end of town.

The limits are worked out by assessing how much heat is generated by the transmitter. The maximum allowed power output can raise the temperature by no more than 0.001% of 1 Celsius. To raise the temperature by one degree you would need 100 towers in a circle around you operating at full bore. Then, if you were warm (I can't really tell the difference between 18C and 19C if I'm honest) you could step away and it would fall away.

But these towers are operating at only a fraction of that limit, so at 5% of the allowable you would need 2,000 pointing at you, all operating at that output level to warm you up by one degree.

Beam forming is part of the 5G spec and means the tower will actively follow a device that is being used as it moves through the sector. Instead of the blast going out to the entire sector, beam forming allows the antenna to direct the connection only at the phone or device being used, so reducing both power output and wasted power, and lowering the possible exposure to those not using the device.

So, if you're worried about such things, the best advice remains to buy the latest generation device and connect to the 5G network whenever possible.

Ministry of Health - Exposures to radiofrequency fields near 5G cellsites

The Herald seems hell bent on talking about real estate and the impact of the virus on sales, but has missed a real trick.

Commercial property is likely to come off the boil (to put it mildly) following our return to L1 or better and I suspect for a number of companies the decision to work from home will become at least a semi-permanent one.

For those with big downtown offices the decision must be made - what on earth do we do with the real estate?

For many, the move home has been a welcome relief from that most disruptive of work environments: the open-plan office.

Sure, those of us who worked in newsrooms don't mind them (so long as there's no angry editor breathing down our necks shouting obscenities about how slowly we're typing) but for a lot of people the constant noise and disruption is, well, a problem.

Having gone home these people will be keen to remain out of the office.

But there is always a need for meetings and gatherings and such like, and if there's one thing that always bugs office dwellers it's the lack of meeting rooms.

So how about offices become a much more mixed bag of offices, hot desks and meeting rooms, preferably with coffee machines. Video conferencing kit is a standard and a given, of course, but why not restructure our spaces to better reflect the new working conditions?

And while we're at it, let's not just look at the Herald's real estate pages, but perhaps further afield. If I'm not needed at my downtown city office, do I need my centrally located house near to amenities and transport links? Could I perhaps bolt for the countryside or the beach, set up shop there and just come into town once or twice a week?

Reader, I totally could.

So while this may not be ideal for all jobs or all employees, there's something that could come out of this as a sort of silver lining - the great tech diaspora as we all make our way to less pricey, fibre-connected, homes by the sea/mountain/bike track as required.

Ultimately of course, we don't really even need to be here in New Zealand at all and while I'm quite happy working locally perhaps my next employer will be based offshore and I'll get paid in hard earned export dollars.

If we're reinventing the economy we may as well go all the way, eh?