I'm told there is only one day currently: Dayday. And there are only two times - coffeetime or winetime. And I'm also told that today is the 53rd of Marpril.

All these things are true and while in a different time line I'm actually on my way to Napier to pick up the kid from the New Zealand Drama School week of acting, currently I am (as you are) at home.

My wife always asked for a quiet and peaceful life but I think her vision had more restaurants and trips to the movies in it. I've warned her before about making wishes without her lawyer present but she doesn't listen.

So here we are and the only real difference between today and yesterday is that the emails I'm being deluged with from retailers and fast food merchants are the reverse of the ones they sent me last time round.

The fruit and vege seller offering home deliveries because their corporate work had vanished told me they'd no longer deliver because they're going back to office life. The retailers that told me they cared for me and for their staff deeply are now telling me they don't care at all and I should drop everything and come to their sale. The cafes, bars and restaurants are pleading with me to come visit but stay out on the footpath.

This is going to be a very interesting recovery period.

I'm assuming of course that we don't crack and end up with a sudden upswing in terms of cases but I think we're totally in the zone now and there won't be too many idiots who decide now is the time to hold that party for grandma and invite all their friends. There are enough of us with the thousand yard stares going on to make sure that's an isolated incident if it happens at all.

But what world are we going back to? Tourism is dead for at least another year, surely, which leaves a very big hole in the economy. Thank the gods for the primary sector (again) because without the farmers we'd be sliding down the slope of becoming a state of Australia and frankly I don't like the spiders and the colour yellow.

Instead, we have a golden opportunity and that opportunity is in the digital space. We can rebuild it, but better than it was before, stronger, faster, more agile, with more buzzwords and a better user interface. We can rebuild retail, we can digitise government (local and central) we can catch up with Estonia and move beyond because we need to, we're isolated, we're all digital natives now and we don't necessarily want to go back even if we could find the path.

The other side is likely to be nothing like the predictions because they're always wrong, especially when they're about the future, but for now it's full of opportunity and potential.

Techblog - How COVID-19 is set to change tech

The Spin Off - What lies on the other side of lockdown and elimination?

The Spin Off - 'Let's finish what we started': Jacinda Ardern announces move to level three

Newsroom - What we do now will shape New Zealand's future 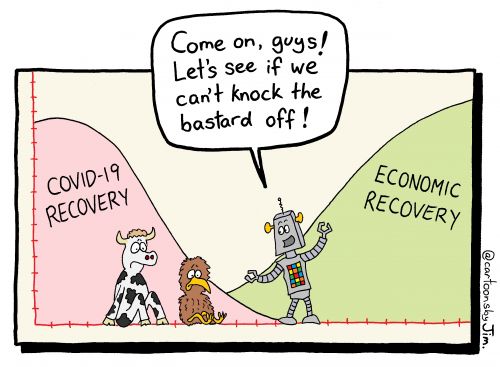 Stand up and be counted

While generally I'm happy to be on this side of the Tasman (better wine, food, company, scenery, sport, spiders, temperatures, accents) sometimes you've got to look over the ditch and demand to know why we can't do what they're doing.

There seems to be this mistaken belief that New Zealand isn't big enough to stand up and be counted and that any attempt to tackle the larger internationals head on will result in them pulling out of the territory.

That old chestnut does not fly in the all-connected, data-driven world of the internet because every single one of us doubles the value of the network (look it up, it's true).

So what network-crazy networking company would shut off five million data points (also known as The Golden Geese) and the opportunity to milk us dry over the next 100 years?

Not one of them.

The Australian government has moved faster and more aggressively to tackle the craziness of the social media giants destroying professional journalism while we still futz around, trying not to offend them.

I am offended. Not by the desire to regulate them but by the lack of action. Social media companies have long since stopped being passive or neutral platforms and become publishers, deciding what gets shared and what does not. They have ignored the existing rules around objectivity, truth, dispassionate reporting, being the fourth estate and everything else that goes with journalism and have embraced one single simple rule: if they pay, they play.

So we get fake news, propaganda, lies, mistruths, half truths and objectionable material, served up apparently without any recourse to local laws, tastes, regulation or requirement.

And when they're caught with their hand in the proverbial cookie jar they say "well, we'll certainly look into that" and then they do nothing. Nothing at all. The problems not only aren't addressed, they're positively polished until they glow in the dark.

If the Aussie government can take a stand, so can we. Last time round we said "look here," and got run over. This time round let's show them some teeth.