I've had a number of reasons to wonder about the future of the human race this week, not least of all because of the opposition to 5G cellphone networks.

The latest version of GSM is being heralded by some as the worst thing to happen since, well, since the invention of the vaccine. And yes, I make that connection deliberately, because the same anti-science, anti-rational thought rhetoric is being bandied about by both camps. I'd throw in the fluoride brigade as well but I suspect they're too busy with 1080 poison petitions.

The irony is, the very network they decry is probably going to be used to deliver the fake news they love so much. And there's the rub - without Facebook and the rise of fake news outlets driven to extremism this nonsense wouldn't have the reach or the impact that it does. Without mobile networks, the social networks that are so all powerful today wouldn't have reached that pinnacle of success. Oh the irony.

The whole thing is nonsensical and driven largely by the lack of sensible information that exists. There's a reason for the vacuum - big companies are terrified of being sued in the US over something a subsidiary said in far flung corners of the world, and so there's a lack of balance in the data presented. Instead of saying "there's no problem, here have a look at the numbers" they fall back on lawyer-speak and weasel words or worse, nothing at all.

If Nature abhors a vacuum then Facebook positive gushes at the chance to fill one. Enter the tin-foil hat brigade, the mum who care, the oddball former oncology trolley pushers who "know all about the causes of cancer", the people with half a mind to get upset about anything, the conspiracy theorists and yes, the propaganda machine looking for another lever to pull.

It's not them I'm so worried about, it's the middle-ground reader who doesn't really know what's going on, hears terrible things and then goes out to find more information. They're presented with wall-to-wall non-stop fake science and they get concerned. Quite rightly too - the stuff being put out about millimetre wave technology, beam following radiation and all the rest sounds like something out of a horror movie and without any balance to it, that's what they see. The odd story from some odd interested media types (ahem) just doesn't provide enough balance to the debate.

I've asked the Office of the Chief Science Advisor to come out with something but it's not on their radar. I've poked the minister on Twitter and suggested something official might be nice but haven't heard back.

If you do hear someone talking up the perils of 5G would you do me a favour and give them some of the links below. EMF Explained is great at gathering the information and sharing it dispassionately.

And if some clown tells you I'm the Vodafone spokesman on this, feel free to let them know I stopped working for Vodafone in 2011.

There's a chocolate fish in it for you.

NY Times - Your 5G Phone Won't Hurt You. But Russia Wants You to Think Otherwise

Remember when Google used to say its motto was "Do no evil" and we all felt that swell of pride that a tech company was actually going to be a force for good?

Most of you are probably too young to remember it, but it was there, for a brief moment. Google was the newcomer, the regime breaker, the game changer. It was going to set us free from the monopoly of Microsoft and give us better search results.

Eventually we also got a browser that worked, an alternative mobile operating system, cheap browser-based processing power for schools oh and of course the end of all privacy as we knew it.

We also apparently got a system that refuses to accept there are laws in New Zealand that the company might like to think about abiding by. Laws relating to name suppression for one thing, but for Google that was both an annoyance and a distraction from the Great Goal (increasing shareholder value) and so should be shunned.

British backpacker Grace Millane was on holiday in New Zealand when she was brutally murdered. A man is on trial for her killing and for reasons that remain unclear to the general public at this time his name has been suppressed.

Name suppression orders are a really odd thing. If you happen to be in court you'll hear his name spoken out loud and might even see him in person. But once the judge has slapped a suppression order on it, you can't share his name with anyone outside the court.

This has always been problematic and is doubly so in the era of international media coverage and the internet. There's no need to abide by New Zealand court orders if you don't operate in New Zealand and you happen to find out his name and you're a UK publication hell bent on publishing the grisly detail. There is if you want to avoid a contempt of court charge, but of course you don't live or work in New Zealand so ha ha, good luck making that stick, Mr Judge.

Google managed to fall foul of this in December last year when it sent a lovely automated email out to subscribers of its Google Trends alert service that not only revealed the suppressed name, but actually included it in the subject line.

On the one hand the company broke the law and Google, like all multinationals, always claim to abide by the law of the land in which they operate. So this was a big no-no for them. Apologies for the error were forthcoming and the local Google representative was called in to the Beehive for a "please explain" meeting.

At the same time Google's PR machine swung into action and dug up a "former Google" staffer who said it was ridiculous, what did little New Zealand expect Google to do, actually check in with the courts before publishing? Ridiculous! The Ministry of Justice has to do better and should have told Google about the name suppression order.

Of course, that's exactly what I would expect Google and indeed any publisher to do - to check in with the court before publishing. That's not Google's way, of course, because it's not a publisher (apparently), despite being the only entity involved in sending out this email.

Now Google says it has reviewed its systems and they all work fine. The company will make no changes to its processes or its attitude.

This also is a PR play - fret publicly at the  time, wait for the dust to settle and then say "yeah, nah" when it's safe to do so.

This time, however, the tech giant appears to have forgotten about Christchurch. Following the massacre in Christchurch and the shockingly woeful approach taken by our social media companies (including Google subsidiary YouTube) the worm has turned and this time round I expect we'll see legal action taken against the company.

Google operates in New Zealand. It sells goods here. It has an office here, a country manager and a government relations man and a communications person, among others. It even pays tax here, although a laughingly small amount consider the work that is undertaken in New Zealand.

Making the claim that the company is somehow beyond the reach of the courts is laughable and given the minister's obvious rage I suspect we'll see someone getting their collar felt.

It will be the wrong person, of course, because that's the thing with tech giants - there are relatively few people who are actually responsible for anything any longer. That's both a by product and the entire intention of the enterprise in a nutshell. No care, no responsibility. 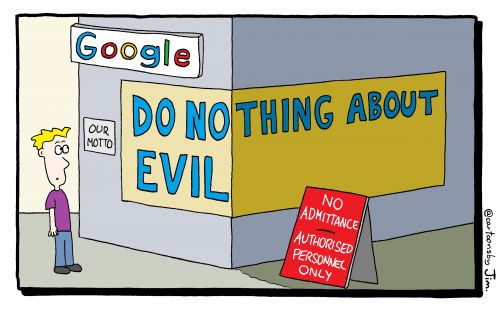 The government's new cyber-security strategy has been unveiled and received something of a boost in terms of funding.

We now have a three-legged model for cyber security at political levels. Policy is run by a unit connected to the Department of Prime Minister and Cabinet (DPMC) known as the National Cyber Policy Office (NCPO). That directs the action while the doing is done by CERT (the Cyber Emergency Response Team) on the one hand and NCSC (National Cyber Security Centre) on the other. The lines are a bit blurred but CERT handles the day-to-day stuff and NCSC handles the national threat stuff.

Either way it's on the increase. We are being attacked both at every level from individual users through to small business, on to corporates and yes, even government agencies and ministries. We're being attacked by kids in basements, by organised crime and by state-sponsored, if not actual state-level villains.

It's all rather exciting.

Attacks range from somewhere more threatening that just using a search engine (ahem) right through to denial of service attacks, phishing and the favourite of spy movies "actual" hacking.

The advice, as ever, is to take precautions, update your system, use complex passwords, don't reuse passwords, don't open attachments from weirdos (or people you know) and of course if and when something does happen do not pay the ransom (but do reach out to CERT so we can all learn and develop).

Stay safe out there.

NZ Herald - The non-financial numbers all corporate boards should know