Whether Chinese telco-equipment maker Huawei is a puppet of a Communist regime or a pawn in the international machinations of two super powers is pretty much immaterial at the moment. The company faces a bleak future after Donald Trump placed them on a blacklist of companies that cannot receive US products or services without express approval from the government.

Almost immediately, Google announced it would suspend Huawei's licence to use the Android operating system and that Huawei would no longer be able to market and sell new Android devices. Existing ones are OK, sort of, but even they won't get Android OS updates.

Given Huawei is Google's number two best selling mobile device vendor and was growing so quickly it would hit number one before Christmas this year, that's a blow for both companies.

But for Huawei it's the icing on the cake of a very bad year and we're not at the halfway mark yet. Will the company be allowed to build any 5G networks in New Zealand? While the UK seems keen to mitigate concerns around Huawei's involvement in future networks (and given what else is going on over there it's not getting a huge amount of air time at the moment) our security services are looking at Huawei's involvement in 5G in quite a different way.

In a 12-page briefing paper released to Stuff under the Official Information Act, advice from the GCSB to the minister responsible, Andrew Little, puts the nail in Huawei's ambitions. This quote is from Tom Pullar-Strecker's article, linked below:

"The paper said Hampton had determined that Spark's proposal would raise a "significant network security risk" and noted that 5G networks were different from mobile networks that preceded them in that many of the sensitive functions of 5G networks would be distributed across those networks rather than residing in a central core."

This is the crux of the matter - it's going to be very difficult for Huawei to convince the GCSB that it will be OK to build any of the network given the distributed nature of those functions and this also explains the main difference between 5G and those networks that came before. If Huawei was asking to build a 4G network and offered to stay out of the core, that would be one thing - but 5G is a different beast in this regard.

Even if we assume there's no actual security problem there (and given the lack of submarine cable operators noticing a dramatic increase in the amount of data being delivered to Beijing, that's certainly a possibility), the political reality is that the current US regime will turn like a rabid dog on countries that don't side with it over this trade war.

However, there is another issue here - how much of 5G capability is built on Huawei's intellectual property? The long and short of it is: quite a bit, and without Huawei's buy-in and involvement, everyone else is going to find it rather difficult to build a true 5G network.

And if the Chinese government decides to play tit for tat, we could see Apple being blocked in the People's Republic, Qualcomm and Intel and others come under the gun for all their sales and access to Chinese tech and resources and that won't end well all round.

That's before we even get to what it means for local network operators if they can't use Huawei equipment at all. Spark and 2Degrees are both heavily reliant on the company and going with an alternate provider at this point opens up no end of complexity.

Maybe it's not quite checkmate just yet.

TechBlog - Huawei vs the US Govt: is this a knock-out blow?

YouTube - How to achieve checkmate in only two moves

Bouquets this week (and a brickbat)

It's been Techweek 2019 and the annual week long festival of techno-goodness has been extremely well attended by all accounts.

Events have taken place throughout the country and with a number of different approaches to the same theme: "innovation that's good for the world", something I think we can all get behind at the moment.

Through poor planning and a dicky knee, I ended up MCing a panel event hosted by Spark all about 5G and the future potential. We saw a demonstration of a 5G handset, plenty of discussion about use cases and had a good conversation with the crowd about real world applications and uses for mobile speeds of around the gigabit level.

One clear issue shone through - the rural: urban split. Will any 5G network be deployed in central city areas where there's already plenty of connectivity and choice or in rural areas where the individual need is greater but the lack of density makes for a difficult time economically speaking.

The answer appears to be a bit of both. Regional New Zealand is likely to be included in the first wave - especially places like Matamata where cellsites are already maxing out and where the extra capacity of 5G service will serve more people at higher speeds.

There's also a view that fixed wireless services are likely to be popular, something which will put more pressure on Chorus in particular.

And of course we had the usual question about health impacts - something that was handled with more aplomb than I would have used. Recently I'm discovering a wave of Twitter accounts (such as @1776_TheWatcher) dedicated to repeatedly having a go at telling everyone that 5G is evil. That account in particular appears to have tweeted about nothing else (other than the odd anti-vaccine comment) which would suggest either a pathological need to focus on one issue or someone being paid to push a line. Since joining Twitter in March it has followed mobile network companies and other anti-5G accounts, all of which are dedicated to pumping out suspiciously similar content. Content such as "fewer apps means less radiation!" and "hairdryers are among the most dangerous sources of magnetic fields" to name but a couple of choice examples.

But in a more appealing vein, the New Zealand Technology Sector Investor's Guide was released by the Technology Investment Network (TIN) in conjunction with the Ministry of Business, Innovation and Employment (MBIE) and it makes for great reading. 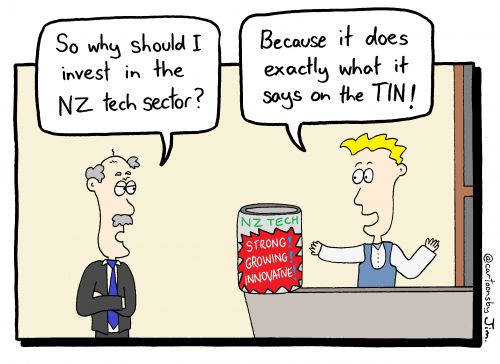 Investment in New Zealand tech companies is up markedly year on year and the sector is now the third largest export sector for the country, having cracked the billion dollars' worth of growth mark. Overall, $11 billion in revenue was generated last year, with just shy of $8 billion in revenue coming from export sales. There are 21,411 companies in the "tech" sector here, employing over 120,000 workers.

So, that would tend to put the lie to the Productivity Commission report that came out earlier in the year which said don't bother trying to build a tech sector in New Zealand because it can't be done. There are a number of areas where we can excel (growth in fintech was the largest year on year: up by 33.2%) and we have both a strong physical infrastructure and a healthy human resource sector to work with.

Although not all is plain sailing, and accounting software giant MYOB has released a survey which suggests in one area at least we have a long way to go.

That is, of course, the area of gender bias.

Only 25% of New Zealand tech companies report a gender balance in their leadership teams and nearly half of all women surveyed reported experiencing gender bias in the workplace.

Only 48% of companies in the tech sector pay men and women the same amount for the same job.

If there's one area we can and should do more in, it is this.

Techweek - A festival of innovation that's good for the world

TIN - The investor's guide to the New Zealand tech sector