Privacy. It's one of those things that you may not realise is important until you've lost it. Once it's gone, there's no getting it back. Once your mother's maiden name or your first pet's name is out there, you can't magically retract it.

That wasn't so important in a paper-based world, but today we're digital and I don't just mean PIN numbers and password words either. I use my thumbprint to unlock my phone. My phone unlocks my bank account pretty much automatically these days. The next phone I have won't do anything so old fashioned - it will probably just use my facial features to let me (or a very good picture of me) open my apps and noodle around in my private life, in my company records, in my clients' data.

Which is why it's so important we have the right protections and the right instruments in place in our legal system to manage the collection and safe keeping of our data in this new world.

Unfortunately, our political servants have failed to do that.

The new Privacy Bill has been referred back from the select committee which has managed not to include some of the critically important elements that define strong legislation overseas, and in particular in the EU where the General Data Protection Regulation (GDPR) gives investigators and officers of the law some serious clout when dealing with reluctant or recalcitrant offenders.

Part of the GDPR regime is a fines system impressive enough to make even the megacorporations of the world sit up and take notice. After all, these are the organisations that gather our data, that share our data and which are often accused of misusing our data. Any system that doesn't take into account how to deal with Google, Facebook, Amazon and the like is a system that won't work.

GDPR fines weigh in at up to a whopping 2% of a company's annual turnover, something which gets taken pretty seriously and would involve senior company officers that misplace our data losing their jobs, and their golden handshakes, and their pensions, and rightly so.

The new Bill in New Zealand has fines of up to $10,000. I imagine the legal fees involved in wrestling that from a corporate would exceed $10,000 at a trot.

Worse still, there's no personal liability factored in, so if the CEO of a company in New Zealand fails to comply with the law, it's the company that gets fined, not the CEO. Personal liability sharpens the mind in ways little else can. Just ask Dame Jenny Shipley about her time as a board director.

But no, we will opt for a softer, more gentile approach that frankly will need to be redone after the first big privacy breach hits home.

Of course, by then it's just too late.

Twitter doesn't know what its users use it for

Once again a megacorporation worth (apparently) US$24 billion demonstrates that it has no clue what people use its service for.

Twitter, once the home of quick, chatty text-based communications between individuals, has largely missed out on the massive growth of social media giants like Facebook and YouTube, predominantly because of what makes the service so useful. It's timely, it's short, it's global.

So of course Twitter has done everything it can over the past few years to destroy the very things that make it work so well. It started by blocking many of the user-designed apps that connect to Twitter so they no longer function. Then it introduced a non-chronological feature so the company could push advertising tweets into your feed AND make it hard to follow discussions. Not content with that, it changed the "stars" to "hearts" whenever someone favourites a tweet (something many do as a form of bookmarking) and now it's decided to introduce a wave of new features that don't rank among the top 100 requested features of any user anywhere in the world.

It would appear the old adage is true - we aren't paying for the service, so we're not the customers.

Twitter has been beset by allegations that it not only allows but enables abuse, that it's little more than the comments section of Stuff writ large and that it is beset by automated software bots pushing certain positions (typically of a fascist, far right ideology). The company has done little to address any of this and the common refrain ("let us edit our tweets and for crying out loud get rid of all the Nazis") appears to have fallen once again on deaf ears.

Instead, the company is introducing new camera capability to make it easier to post photos (I have never thought it difficult to do this but OK) and to tag them with your location (something you should turn off, by the way, unless you want everyone to know where you live and when you go out) and a new colour-coded regime for discussions.

Oh and of course it's going to remove the number count on the likes and retweets you get.

This is doubly creepy because rather than encouraging people simply to have "good conversations" and to debate the point, it means users will end up debating trolls more often than they do today because there's little opportunity to see which parts of the discussion are getting the most attention and which can be ignored.

Oh and it also means an end to the concept of "ratio" on Twitter. That is, when a tweet gets more replies than likes (so everyone hates the sentiment and is wading in to tell you instead of liking the tweet or sharing it) - something Twitter founder Jack Dorsey found himself on the wrong side of recently.

So no editing of tweets, and no getting rid of those obviously defamatory or fascist commentators.

All told, Twitter is rapidly joining those services, like Facebook, that have a certain usefulness but aren't essential to have and which will wither on the vine if they're not carefully managed. Facebook is losing the next generation of users already (in the US it has dropped from being used regularly by 71% of youth to only 51% of youth and that's a massive turnaround) and if Twitter can't figure out how to give its users a better environment I suspect it'll slide sideways into obscurity as well.

After all, does anyone here remember ICQ?

The Mary Sue - In a Highly Unpopular Move, Twitter Plans to Hide Retweet and Like Metrics, Killing Ratios

It was 30 years ago today: where to now for the World Wide Web?

And what a 30-years it has been. Access to great works of fiction and literature throughout the ages, the ability to see art and science from around the world in your very home. The sharing of human knowledge and understanding.

Yet somehow we've also seen the rise of fascism and fake news, the advent of the 3-second attention span, memes, and the massive disruption of media and the rise of the cat video as a form of entertainment.

I despair, yet am comforted, all at the same time. But despairing. But I love it.

You only have to look at YouTube to see this bipolarity at work: a fabulous tool for sharing and learning (from the Khan Academy through to the 'how to bone a leg of lamb' video I keep bookmarked for obvious reasons) and a cesspit of fake comments, objectionable material and copyright claims and counterclaims.

And now the web faces another challenge - one that's been obvious from the start but which is beginning to have real world implications. Not everyone's Web is created equally.

We have China already firewalling the rest of the world, and our providers playing along with them. We have Russia looking to disconnect from the internet at large (more than just the Web for sure) and we have apps destroying the democracy of the web. Now you need certain apps to see certain content instead of just getting it all pumped down to you through a web browser.

It's the balkanisation of the web and the rise of the walled garden all rolled in together.

So what will the web look like in 30 years' time? That's really impossible to know. I would hope we have more tools to enable the expansion of human knowledge and study out even further than we have today, but I fear we'll have the cable TV model of apps and costs that limit our reach.

Only time will tell.

The Guardian - Tim Berners-Lee on 30 years of the world wide web: 'We can get the web we want'

ZDNet - The web in 30 years? It'll be beyond our imagination, says Tim Berners-Lee 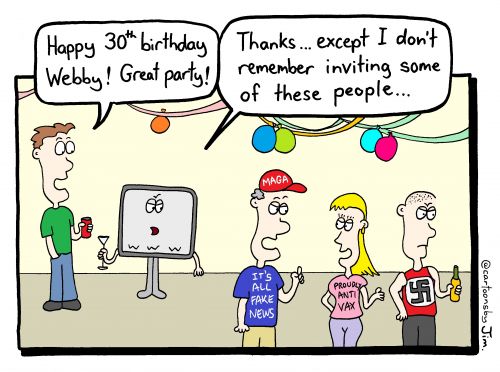